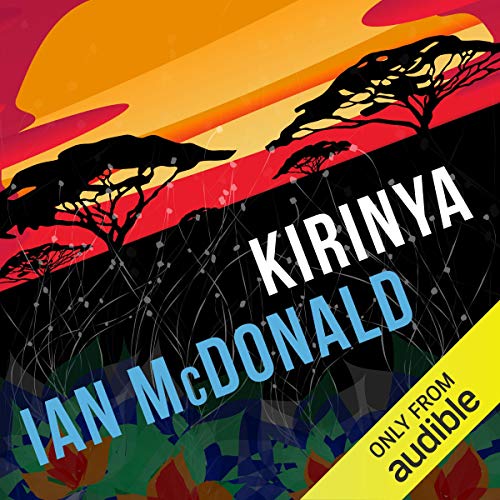 The end of the universe happened at around 10 o’clock at night on 22 December, 2032. It’s just that humanity hasn’t realized it yet. And the Chaga, the strange flora deposited from the stars, is still busy terraforming the tropics into someone else’s terra.

Gaby McAslan was once a hungry news reporter who compromised her relationship with UNECTA researcher Dr. Shepard for the sake of her story...but Gaby is no longer a journalist and she doesn’t want to be a full-time mother, even though her child, Serena, is her last link with Shepard.

Gaby’s fire has gone out; she’s gone soft. But the massive political and military upheavals rocking the world are about to drag her back into the action.

"This is a huge and ambitious novel, the work of a supremely talented writer approaching the top of his game." (SFX)
"So outstanding a writer that he deserves reading beyond the science-fantasy market ... He has such marvellous talent, so vivid an imagination. His prose sings and zings – simultaneously." (The Times)

What listeners say about Kirinya

I didn't get what I wanted out of it.

Originally posted at Fantasy Literature. We review SFF, horror, and comics for adults and kids, in print and audio daily.

After recently enjoying Ian McDonald’s Evolution’s Shore, the first book in his CHAGA series, I was eager to proceed with book two, Kirinya. I wanted to know where McDonald was going with the fascinating ideas he presented in that first novel. What is the goal of the Chaga, the alien evolution machine that has landed on Earth in the form of a ground-covering jungle that changes the landscape and its human inhabitants as it slowly progresses across equatorial regions? What is in the BDO (Big Dumb Object) that came from Saturn and hovers in Earth’s orbit? How will our world’s societies and cultures be affected by these otherworldly intrusions?

As Kirinya begins we learn that Gaby, the famous feisty Irish journalist, has had Shepherd’s baby. Because their daughter Serena was affected by the Chaga, Gaby and Serena are sent to live in the Chaga and not allowed out. People who live in the Northern Hemisphere don’t want to be infected by those who’ve been changed by the Chaga because of the weird genetic mutations it causes. Deprived of her career and her connection to Shepherd (who’s in the BDO), Gaby sinks into obscurity and lives, for many years, as a whore and a drug addict who neglects her daughter.

Eventually Oksana, the Siberian pilot, shows up and Serena leaves home and joins a terrorist group. After a tragedy strikes, Gaby is finally shaken up enough to decide to make some life changes. With some help from Faraway, a former lover, she gets back on her feet and becomes a spokesperson for a group that wants to put together a world peace summit to address the way the Northern countries are treating the Chaga-infested South. Meanwhile Serena is involved in a terrorist plot to wrest control of the BDO from the American military. Some of Serena’s action scenes are quite exciting and would make great movie scenes.

We learn very little about the things I wanted to learn about in Kirinya. We get only a few chapters from Shepherd’s point of view in the BDO. These consist of his diary entries and they only hint at the big picture. Fortunately, Shepherd talks a lot more like a poet than a scientist. (I know dozens of scientists and not one of them talks like Shepherd does.) Shepherd tells us about some of the intriguing findings in the BDO, but these updates stop just when they get interesting and we never learn more.

We also don’t see nearly as much of the Chaga-induced changes as I was hoping to see and most of what we do see is quite a bit different than I was expecting after reading Evolution’s Shore. It seemed like the Chaga was a benign influence that would provide people with their daily necessities and allow humans to live in peace and prosperity rather than conflict and competition. Or it might have been a vehicle for Africans to empower themselves, overthrow their oppressors, and transform their role in the global economy. But that is not what Gaby’s new world is like which, I suppose, may be Ian McDonald’s commentary on human nature and the way developed nations suppress undeveloped nations rather than an abandonment of his original ideas. The AIDS theme, which I found fascinating, seems to be completely dropped, though.

There are a few glimpses of how the Chaga has changed life in the South, such as the bus driver who has no legs and whose nerves connect directly from his spine to his bus’s electrical system. Or the immensely huge woman who remembers everything she experiences by storing the memories as fat. Or the way everyone who lives in the Chaga can tune their brain to receive radio signals. There was an interesting speculation about the development of human consciousness and a cool idea about whale song and computer language, but most of the story focused on Gaby’s depravity and Serena’s rebellion rather than the effects of a world being overrun by an unknown alien presence that’s trying to remake the human race.

I didn’t get what I wanted out of Kirinya, but I still admire Ian McDonald’s style and I look forward to reading more of his work. The audio version of Kirinya was produced by Audible Studios and is 17.5 hours long. Narrator Melanie McHugh is superb. Her voices for each of the characters are distinct and fitting.

This second book in the Chaga series is a story rich in character, imagination, philosophical and scientific ideas of the most engaging kind. Woven together in a narrative that flows through the strangely transformed Africa, both the natural and political landscapes that pulse with the alien life that redefines earth and humanity, on out to the very frontier of space. Melanie McHugh’s narration is so superb each character’s voice is strong and utterly believable. Can’t wait to see where this story goes.