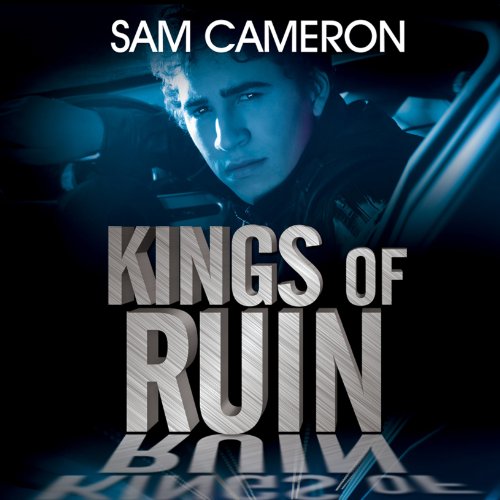 By: Sam Cameron
Narrated by: Josh Hurley
Try for £0.00

Aliens and clandestine government organizations play major roles in Sam Cameron's inventive, strikingly original LGBT sci-fi novel, but at its center is the relationship between Danny Kelly and Kevin Clark, two Nashville teens undeniably drawn to each other as they grapple with the destructive, extraterrestrial Ruins.

Josh Hurley turns in a versatile, pitch-perfect performance that captivates the listener from the outset, and adroitly captures this young adult novel's freewheeling teenage spirit and unique blend of the emotional with the supernatural.

Danny Kelly cares only for rock 'n' roll and fast cars. Too bad he's stuck in the capital of country music and he's banned from driving until he turns twenty-one. Plus he likes other boys, a secret that he's vowed to keep until he graduates high school. When his stepdad's new truck roars off on its own, Danny discovers a secret that is endangering cars and drivers across America. It almost kills Danny, too, until he's saved by seventeen-year-old Kevin Clark.

Kevin's gay, handsome, and confident, but working with his dad's secret government organization has left him lonely. It's going to take a weekend of car chases, fiery explosions, and country-western singing to save the citizens of Nashville from certain death - but can Danny protect his heart and secrets as well?

What listeners say about Kings of Ruin

The first few chapters flew by me as there are so many names that sound like cars and states. Dallas, Ford, Music Box, etc. I didn't really get engaged until the garage scene.

I do like the concept; Kings of energy floating between vehicles and gaining more power. How lights and colours determine the strengths.

The narration was done with a good effort; distinguishing the different characters.

The plot at times can be quite slow and other times, it makes you wonder what the point of it is. There are few parts where it should be more dramatic, more climactic. But instead it finishes with a small dull line.

There's probably more in the series but given this was alright, I'm not sure if I would like to jump onto the next one.

A decent story with some faux pas

The story overall was good, even thou at points I felt like the description of the guys approached the "male novelist writer writes female characters" trend; many guys were described in terms of 'how protagonists would like them' and that felt a little unnatural for me. The plot was interesting, and even thou at first the concept felt a little cringey, this sensation quickly vanished and I managed to enjoy the story. The romance was cute, without exagerated melodrama which was a breath of fresh air.

It's nothing completely mindblowing or deep, but of you want some light "reading" (listening, I guess) with some great narration, this is an audiobook you'll enjoy.

Great concept with excellent character development. PLEASE tell that this is the first of a new series.

would love to hear a follow up story on this one. would be awesome. please

This was such a great gay teen tale! I usually complain about too much romance in my stories but with this one I'm complaining about the lack of romance between Kevin and Danny. I wanted so much more with them trying to find the King together. I felt like they were apart for most of the story. I hope they have more time interacting with one another in the next story, if there is one.

But this writer is talented. A uniquely told story that was refreshing, and fun with some serious undertones. But I truly loved Kevin and Danny and so want more of their story.

😍 Josh Hurley 😍 did an excellent job bringing each character to life and he is now one of my top ten favorite narrators.

Loved this short and sweet book, interesting plot line! The narrator was perfect for Danny.

A great story (though a little too similar to Christine) that has great chemistry between the two main characters that leaves you eager for more.

This is a good book of you want something quick to listen too. Not much in character development and I’m a little baffled on the the information that’s provided for the ruins.

The main characters (the boys) interact well and I wish there was more between them.

Overall this book is a “meh”

Ended Well but Bad Execution on

I found this book to be a sloppy amalgamation of genre. There was never any focus to the story beats until the very end. The characters were either empty husks preforming a roll or unnecessary perspective trying to add something interesting to the story. —— Now... the base story is good. I like the lore built around it and the way the kings act. My problems with the book have nothing to do with that. It really is the characters and the author getting easily distracted that bugged me. The main guy was supposed to be 17 but he acted like a whiny 14 year old. I will acknowledge the growth the character took at the end, no longer complaining about something and in turn doing something about it. But honestly I will not reward what is baseline storytelling with anything more then a sentence. —— This felt like it should have been a small cast story, but there were way too many people voicing an opinion to keep it coherent. Every time the step dad and sis showed up I knew it was going to hold back the pacing. The old man and toys were interesting and a fun perspective but wholly unnecessary to reach the conclusion we did. —— And lastly... why was this a gay story? There was 0 reason for it. With only a passing purpose for it playing a secondary role of discovery and acceptance, but even then it felt hollow. And that is my biggest gripe with this small story. Lots going on with tons of fun ideas but left hollow by an uninteresting cast and an author who did not fully know how it all swayed and moved together. Everything felt disjointed to me. It’s a fun base story on a the living car “trope” but it falls apart on its execution. —— The buss scene at the end made up for a lot of its short comings though. Being suspenseful and well choreographed, allowing the reader to build in where it was needed but also forcing them to endure the ride. Thumbs up there!

I like the story but it seems to be missing something. I feel like they should have been able to get the "King".

I loved it, but the epilogue :(

I absolutely loved this book...... And then the epilogue happened and it broke my heart. Wish it would have turned out differently. But I still loved it!