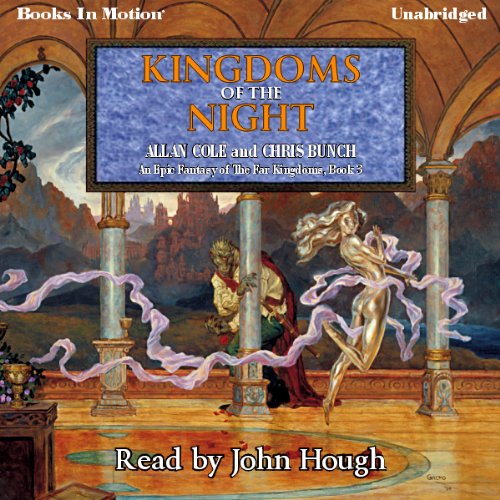 Kingdoms of the Night

Ever since Amalric Antero returned from the legendary Far Kingdoms, bringing with him magic and riches, the people of Orissa believed they lived in a golden age. Even Amalric did not suspect the truth: that dark forces from another world threatened his beloved city. Then a beautiful stranger arrived claiming to be the great-granddaughter of Janos Greycloak, master-wizard and betrayer of Amalric’s youth. And Amalric learned that the idyllic lands he had thought were the Far Kingdoms were not - and that the real Far Kingdoms, the Kingdoms of the Night, were all that stood between civilization and unimaginably evil powers from another world.

What listeners say about Kingdoms of the Night

I really liked this book, and thought I would like the audio version. But like the other reviewers I have to agree, the narrator is terrible! He has got this awful nasal problem that makes him sound like Gargamel with an anger management issue. Save your credit!