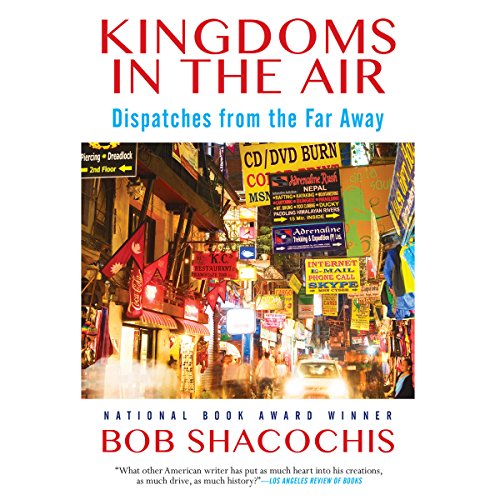 Kingdoms in the Air

Best known for his sweeping international and political fiction narratives - including The Woman Who Lost Her Soul, which won the Dayton Peace Prize and was finalist for the Pulitzer Prize - Bob Shacochis began his writing career as a pioneering journalist and contributing editor for Outside Magazine and Harper's. Kingdoms in the Air brings together the very best of Shacochis's culture and travel essays in one livewire collection that spans his global adventures and his life passions; from surfing, to his obsession with the South American dorado, to the time he went bushwhacking in Mozambique.

In the titular essay "Kingdoms", the longest work in the collection, Shacochis ventures to Nepal with his friend, the photographer Thomas Laird, who was the first foreigner to live in Nepal's kingdom of Mustang as the forbidden Shangri-la prepared to open its borders to trekkers and trade. When the two men return a decade after Laird first lived there, Shacochis observes in brilliantly evocative prose both the current cultural and political landscape of the country and the changes that his friend has to reconcile with.

Replete with Shacochis's signature swagger, humor, and crystalline wisdom, Kingdoms in the Air is a majestic and essential collection from one of our most important writers.

"Shacochis has extended his knowledge and imagination into places most of us have never ventured." (Washington Post)

What listeners say about Kingdoms in the Air