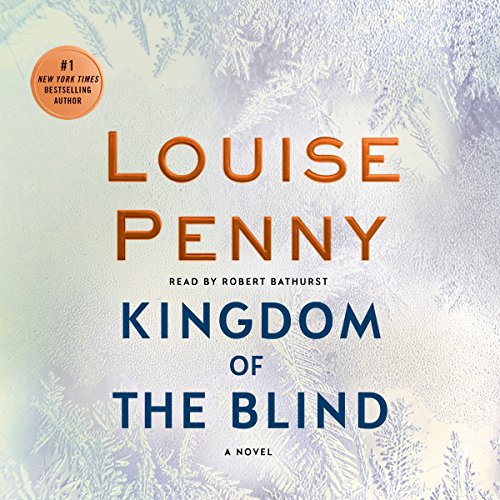 Kingdom of the Blind

By: Louise Penny
Narrated by: Robert Bathurst
Try for £0.00

Winner of the 2020 Audie Award for Best Male Narrator

"[Narrator Robert Bathurst] engages us completely...If you haven't listened to this series, start at once. You'll love your stay in Three Pines." (AudioFile Magazine on A Great Reckoning)

Kingdom of the Blind, the new Chief Inspector Gamache audiobook from the number one New York Times best-selling author.

When a peculiar letter arrives inviting Armand Gamache to an abandoned farmhouse, the former head of the Sûreté du Québec discovers that a complete stranger has named him one of the executors of her will. Still on suspension, and frankly curious, Gamache accepts and soon learns that the other two executors are Myrna Landers, the bookseller from Three Pines, and a young builder.

None of them had ever met the elderly woman.

The will is so odd and includes bequests that are so wildly unlikely that Gamache and the others suspect the woman must have been delusional. But what if, Gamache begins to ask himself, she was perfectly sane?

When a body is found, the terms of the bizarre will suddenly seem less peculiar and far more menacing.

But it isn’t the only menace Gamache is facing.

The investigation into what happened six months ago - the events that led to his suspension - has dragged on, into the dead of winter. And while most of the opioids he allowed to slip though his hands, in order to bring down the cartels, have been retrieved, there is one devastating exception.

Enough narcotic to kill thousands has disappeared into inner city Montreal. With the deadly drug about to hit the streets, Gamache races for answers.

As he uses increasingly audacious, even desperate, measures to retrieve the drug, Armand Gamache begins to see his own blind spots. And the terrible things hiding there.

What listeners say about Kingdom of the Blind

Louise Penny’s books are ones I anticipate every year or so. Kingdom of the Blind did not disappoint me at all, this outing. I truly enjoyed this book. I don’t like to give spoilers, although I will say I have a great gasp at the end and began hoping like hell she’s already started the next.

Robert Bathurst is the perfect narrator. He conveys the warm Gamache voice without resorting to cringe-worthy depictions of the female characters, like some male narrators attempt. In fact, some passages he read I enjoyed so much, I back-tracked and listened to them again. I also appreciated that he didn’t rush through the words. Sometimes narrators will do this, making it difficult to visualize the scene, because my mind is already racing to catch up to the next words. Adjusting speeds only makes them sound stodgy and annoying. Mr Bathurst doesn’t do this, he enunciates clearly and with purpose. A very good performance, indeed.

I found the experience very satisfying.

I agree with another reviewer that this book is more for old friends then new acquaintances. Since I am an old friend of the series, I am happy with the book. It feels like comfort food and I am satisfied. But it also feels like the last one. “Everything” was tied up at the end. If Louise Penny, like one of her characters said, is tired of the blood and death I for one can respect that.
One thing I am sure of, this will not be the end of Louise Penny as an author. If she takes Gamache and the other characters that she likes spending time with in a new direction I will be here waiting. If she moves on to another subject, I know it will be a pleasure to read. Many thanks for this book and all of the others before it.

The first eight or ten books were wonderful. The unusual characters, while sometimes over
the top, were refreshing as a change of pace kind of story. The last four or five books have been a chore to finish.
Found getting past the first chapter this time impossible. Every bit of life has been wrung from these folks and it is
time to move on to a new set. Louise Penny is a super author, but this has been pushed beyond the limit.

Kingdom of the Blind

I always love the characters and the Gamache stories, however, this book was hard to follow almost to the very end. It was too gritty-rather disturbing. I personally prefer a story with more of a balance between joy and dispair.

Oh boy! I loved the early Gamache books. The story lines were compelling, the array of characters rich, the narration top notch. Well, not any more. In fact, I'm returning this book and it's never again for Gamache.

It's as if Louise Penny's writing has regressed instead of developing over the series, finally reaching the awful depths of this piece of work. Repetitive, tiresome, hackneyed, Bizarre behavior by contrived characters who have stagnated in their development by a writer who seems increasing desperate to find some sort of angle for a new book but ends up with a mess. Things that were quirkily humorous in early books have become annoying tics. Characters that were interesting and evolving have become boring and trite. The entire story is a confused jumble, and it appears Penny just tries to keep it going by throwing more ill-conceived situations and characters into the the mix. "Oh, lets have Gamache randomly sing Edelweiss at various odd points, that should be good". "Ah, let me repeat "whores and trannies" endlessly every time I want to describe the drug underbelly in Montreal. That will really get the mood of the place". And on and on and on ...

As for the performance, well, Robert Bathurst is no Ralph Cosham. Ralph brought the characters alive, with rich voice characterization, French Quebec accents and a clear spirit that enhanced the work. Bathurst is monotonous, devoid of accent, charm or any effort to put that into his characters even though Penny continues the endearing sprinkling of French words and phrases. It's as if he's just going through the motions with a tape loop in the back of his head going "just get it over with as quickly as possible and cash the check". Cosham added unique flavor and depth to Penny's work. Bathurst takes a bad job and - as if it were possible - manages to make it even worse.

Désolé, Armand. Hang up the boots, mon ami. Your time is up.

The poorest of all her works

Unlike her earlier works, Kingdom of the blind was tedious to read. Neither of the two plot lines held my interest and the interaction of the characters dismally flat. To be sure, my negative reaction to the story was multiplied by the style of the reader whom I have not liked since he started being a reader for this series. Other than Gamache. the character’s voices did not project real voices, especially those of the women whom always seemed high and sweetly. I will be returning this audiobook without completing it and will preview any further books by Louise Penny, whose earlier novels I list among my all time favorites.

Another wonderful story from Louise Penny. Enjoyed the familiar scenery and characters. Only bad part is waiting a year for the next one.

Last Gamache book for me

I’ve loved all of these books and listened to most of them multiple times. I loved Ralph Coshen as narrator! The way he verbally portrayed the characters was perfect- he made them real and believable. Robert Bathurst is a very very poor replacement. I tried in the previous books to accept him-I truly did. But his interpretations of characters are so limited. No variety; no understanding of the characters; he’s awful. But this book is not as good either. In the author’s attempt to keep new readers informed, she rehashes everything that has ever happened. It wasn’t until chapter 12 that you begin to hear the story. And Bathurst reads all that rehashing in a sentimental, maudlin tone that is boring rather than clarifying. I don’t know where the author will go in the future, but to me, Gamache and cast are past their prime. Unfortunately, this is the last one for me.

I love this Canadian series!

The publisher summary gives this novel a nice setup. There are two plot lines; one is Gamache being named executor of the will of a woman he had never met or heard of while the other concerns finding the carfentanil that Gamache allowed to get loose in the prior novel. Robert Bathurst's narration is excellent as usual.

This was just blah, I didn't even care if I finished it. I waited a long time to finally get to listen, and it just was not up to her standards.