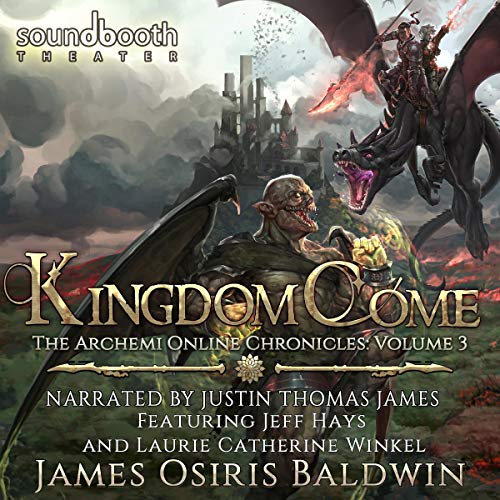 As reward for stopping a serial killer and restoring the Kingdom of Vlachia to its rightful ruler, Dragozin Hector and his queen dragon, Karalti, have earned a noble title, a castle, and land of their own.

There’s only one problem – it’s occupied. By a freaking elder vampire.

Not only has the vampire unleashed the blight of undeath across the land, but Hector's nemesis is on the warpath. His mission? To steal Karalti, kill a god, and use their combined power to become the Insane God-Emperor of Archemi.

Hector never wanted to go back to war, not even in a video game. But now, he must fight to claim his territory from Ol’ Fangface before everything is taken from him - his dragon, his territory, and the woman he loves.

What listeners say about Kingdom Come: A LitRPG Dragonrider Adventure

Another improvement in story for this increasingly interesting series, some of the plot changes and surprises made this jump levels in entertainment and with solid performance from SBT then this is a great purchase for any collection.
I would like to see a bit more of previous characters from previous books but this may happen in further books otherwise very good.

what a twist - no spoilers

OMG effing loved this book. The second half of this kept me hooked. No spoilers so won't explain further.

This was awesome! Really good action and a good amount of funny parts!

I found the story to be quite entertaining and funny in places I will admit I found the characters to be enthralling no pun intended.

best one yet!! love this series can't wait for the next one may have to start again from the first book

I'm not against sex acenes but...

The whole sex scenes through me for a bit. The story went from no sexy time to blow by blow action that went all in on the sticky and slippery action. I typically try to avoid books with too many of these scenes as they are usually VERY male centric and I just hate the whole "I need the D" attitude many females have in books without actually having any real sensual themes, it's almost always "wam bam thank you mam" sex and it's so very dull after hearing it over 1,000 times in different books.

love this series and love the narrators. can't wait for the next book. worth every penny.

The first two books in this series weren't too bad, nothing that would prompt me to write a review though.
Early in the third book the language was way worse than the first two in the series, just made me cringe. The first two books were not shy with f*ck, but Kingdom Come has language that made me believe he forgot how to express the story or just got lazy. The sex scene was inappropriate and detracted from the story. I will definitely be returning this book and if I can, books one and two also. I don't want them in my library. It's sad, I was enjoying the series.

Solid 3rd entry to the Archemi on line world as long as you can overlook some big plot holes that become obvious as the story moves along. My big gripe and why its not 5 star material is the clumsy and awkward explicit sex scenes. These add NOTHING to the story and seem to be inserted only to appease the teen boy crowd. They nearly ruin the pacing of the book. Romance is fine but the scenes are not romantic and are nearly cringe worthy.....Other than that, the book as a solid addition to the LitRpg genre.

I found this book too be a reasonable listen oh, I would have gave sound booth five stars, but they have a tendency to make the characters whisper at times that makes it extremely hard to listen to while you're driving.
sadly it looks like I'll have to wait till the next books comes out to continue the series...
the cliffhanger was expected oh, but it did have several unexpected spots which made it more interesting, especially the twist at the end.
we'll be waiting for the next books to come out someday soon.

Who doesn’t love dragons? The companionship of Hector and his dragon has made this series a lot of fun. The trials they encounter are unique and engaging. The plot has really drawn me into this series.

This is a great cast performance by some of the best in the business. I usually read as much as I listen. You would definitely be missing out by not listening to this book!

I had enough!! I will no longer waste my time!

Although I like the focus the author has for his books, I finally got tired of how childish/juvenile Hector (lead) seemed on a consistent basis. I understand he is "supposed" to be in his early/mid 20s, but listening to the first book (Dragon Seed), pushing through the second (Trial by Fire), it was too much by the third. The author's style became more and more vulgar by the 3rd book, and almost every encounter needed a player or NPC to curse. For some reason, we also needed graphic sex moments (I guess the author felt he was getting left behind by the other RPG Harem books; I don't know...) But when I found myself skipping sections to bypass this stuff, I knew it was not worth keeping up with this series. I would rather invest in other books on my wish list. Too bad..

awesome , but I hate when next book not ready.....

my heart is broken, the next book wont be out until the end of the year..... noooooooo

The gang is back and stuff is about to get even crazier! Budding romance, angsty dragons, cheaty-overpowered enemies, and epic battles are only a taste of the pie in this episode (aka book 3 of the series)! How will the Wild Bunch make out this time?

Soundbooth continues to do an outstanding job with the narration - closer to an audio play really!

I really enjoyed how things progressed in this one - it had me on the edge of my seat at times.

I can't wait for the next one to come out!