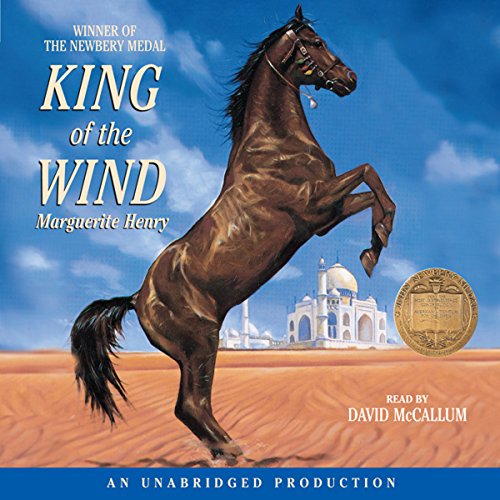 King of the Wind

By: Marguerite Henry
Narrated by: David McCallum
Try for £0.00

He was named "Sham" for the sun, this golden red stallion born in the Sultan of Morocco's stone stables. Upon his heel was a small white spot, the symbol of speed. But on his chest was the symbol of misfortune. Although he was as swift as the desert winds, Sham's proud pedigree would be scorned all his life by cruel masters and owners.

This is the classic story of Sham and his friend, the stable boy Agba. Their adventures take them from the sands of the Sahara to the royal courts of France and, finally, to the green pastures and stately homes of England. For Sham was the renowned "Godolphin Arabian" whose blood flows through the veins of almost every superior Thoroughbred. Sham's speed - like his story - has become legendary.

What listeners say about King of the Wind

So well read! Beautiful descriptive language bringing this story to life! A mix of emotions!

You cannot go wrong with Marguerite Henry's books. My horse crazy daughter delighted in this one.

A Book for a Lifetime...

"King of the Wind" is Margarite Henry's finest work. I've loved it for over 50 years, and I was thrilled to find it here in Audible. It was a total pleasure to listen to one of my most treasured stories of all time being told by David McCallum, one of my favorite actors. He seemed to be into the story, and read it with such ease that it was obvious that he had invested time in practice.
I have given a 5-star rating because all categories deserve it.

This is a wonderful story by a favorite childhood author. I enjoyed listening to it with my daughter. The narration is outstanding. This audio performance was one of the best I have heard. I will be looking for other books read by David McCallum. One feature I especially like is that unlike some audio books, this book is divided into chapters that match the paperback copy I have. It can be so annoying if you want to switch between a hard copy and audio and the chapters do not match. I usually read aloud at home, but enjoy listening while in the car.

Amazing book! I really liked it. I would recommend this book to 12 year olds.
:)

one of the very first horse books i ever read.

This was one of the very first horse books i ever read. It single handedly has been responsible for my love of horses and racing and moorish art. i have owned MANY horses in my life, and i always try to link them back to Sham in someway.

This was the perfect road trip book! Every member of our family thoroughly enjoyed the story. The performance was wonderful and Drew us in.

A well read performance of a moving tale. Unabridged text makes it easy to follow along with the original text, if desired, and thoughtfully placed background music enhances the sense of place. Highly recommended.

I collected M Henry's books when I was a child!

This was the best way to visit my love of horses again.
David McCallum was a great reader.
This audio book was interesting and a great listen!
Audible 20

Wonderful story of love between a boy and his horse. Henry is a master storyteller.

I used to read this book when I was in elementary-middle school. To me, this book is a timeless classic, something you can listen to or read over and over again and never get tired of it. Marguerite Henry is by far one of the best horse book writers out there.