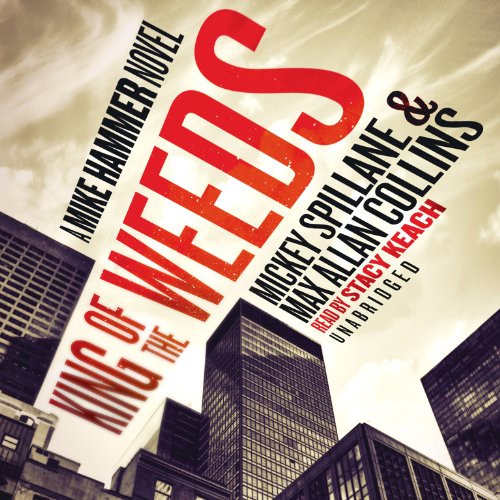 King of the Weeds

In what Mickey Spillane had planned to be the final Mike Hammer novel, Hammer finds himself up against a clever serial killer targeting only cops.

A killer Mike Hammer's old friend Captain Pat Chambers had put away many years ago is suddenly freed on new, seemingly indisputable evidence, and Hammer wonders if this outwardly placid, very odd old man might somehow be engineering cop killings that all seem to be either accidental or by natural causes. At the same time, Hammer and Velda are dealing with the fallout - some of it mob, some of it federal government - over the $89billion cache the detective is (rightly) suspected of finding not long ago.

What listeners say about King of the Weeds

The old ones are still the best

If you could sum up King of the Weeds in three words, what would they be?

What other book might you compare King of the Weeds to, and why?

Have you listened to any of Stacy Keach’s other performances? How does this one compare?

No but I will look out for more

Brought back the feeling of illicit reding of Spillane books when I was a schoolboy in the 1960s.

It's a shame there aren't more Mike Hammer novels available as audio books.

Stacy Keach made it believable .The writing was excellent and as expected for MS.

MS gives descriptions and character dialog that's not common or seen anymore in todays modern writing and it's fantastic.

This is the way real detective investigations actually work ,or at least how they did or should have. Mike Hammer is a classic and nobody does it better.