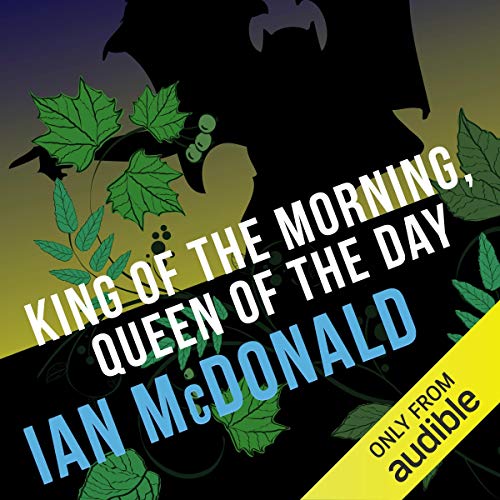 King of the Morning, Queen of the Day

Winner of the Philip K. Dick Award and the Prix Imaginales.

Three generations of women share a mysterious power - one that threatens to destroy them. In early-twentieth-century Ireland, life for Emily Desmond is that of the average teenage girl: she reads, she's bored with school, and she has a powerful imagination. Then things begin to change. Her imagination is so powerful, in fact, that she wills a faerie into existence - an ability called mythoconsciousness.

It's this power that opens a dangerous door that she will never want to close, and whose repercussions will reverberate across time. First to be affected is her daughter, Jessica, who, in the mid-1930s, finds that she must face her mother's power by using the very same gift against her. Then, in the near future, Jessica's granddaughter, Enye, must end the cycle once and for all - but it may prove too powerful to overcome.

What listeners say about King of the Morning, Queen of the Day

I feel like this book took a bunch of my favourite things - fairies, Irish mythology, kick-ass heroines who fight monsters - and somehow made me hate it all. It takes deliberate effort to do that!

A huge problem with the book is its triparte structure. It focuses on three generations of Irish women who share an ability to shape reality called "mythoconsciousness". This sounds cool, but unfortunately Ian McDonald decided to write each of the women's stories in completely different styles. I quite liked the first part which takes the form of an epistolary novel and focuses on Emily, a wealthy, spoiled teenage girl with an over-active imagination and a penchant for poetry. Emily is a bit annoying and shallow, but I could tolerate her because she's so young and sheltered, and because her story is fun and engaging. I especially liked her strained relationship with her scientist father: while he is desperately trying to prove that alien life forms exist and are trying to contact us from space, Emily inadvertendly destroys his career by proving the existence of fairies.

The next part is set in the 1930s and deals with Emily's daughter, Jessica, a foul-mouthed but beautiful teenage girl. Jessica is a much more likeable character, but the plot really starts to go down hill from here. Everything becomes very surreal and confusing. I think McDonald was going for Joycean. The problem is that you have to be really good to pull off Joycean and McDonald's prose just doesn't cut it.

The third part of the novel was by far the worst. Set in the 1980s, it focuses on Jessica's granddaughter, Enye. By night, Enye is a katana-wielding super hero who fights the evil manifestations that have leaked out of the mythic realm since Emily opened the door to it. By day, she's in advertising. I'm not really sure what style McDonald was trying to emulate here (or possibly parody? Did I miss something?) but I never want to read anything like it again. The plot slows to a crawl and meanders in all directions. Apparently, Enye has to save the world, but she takes forever to get around to it. In the meantime, we spend ages hearing about her relationship with sleazy, bloodless lawyer Saul and a musician called Eliot who really reminded me of Shaggy from Scooby-Doo. Did Enye suffer from some sort of split personality disorder to fall for these two guys? Or is she just really attracted to ultra boring guys, no matter what shape they come in? I have no idea.

The first two parts of the novel are a bit too wordy for my liking, even bordering on pretentious, but the third part made me want to scream. It's ridiculously repetitive and verbose. A German car is described as "teutonic". Enye gets "impaled on a hot spike of curiosity". Then there's the metaphors that make zero sense. How the heck does something "taste like a light-bulb"? McDonald seems to think that repeating the same word over and over makes it poetic or significant. I lost count of the times someone was referred to as "an aged, aged man", "an old, old friend" etc. Even worse, there are countless descriptions like this: "She knew he knew. He knew she knew he knew. She knew he knew she knew he knew." I kid you not. There's a bunch of interesting ideas and concepts in this novel - especially the idea that hell is not "other people" but rather too much of oneself - but the execution is just terrible. This is a prime example of how poor language and plot structure can destroy an otherwise good story.

Deirdre Mullins is an okay narrator. I mostly liked her performance, although I felt she went over the top when portraying emotion.