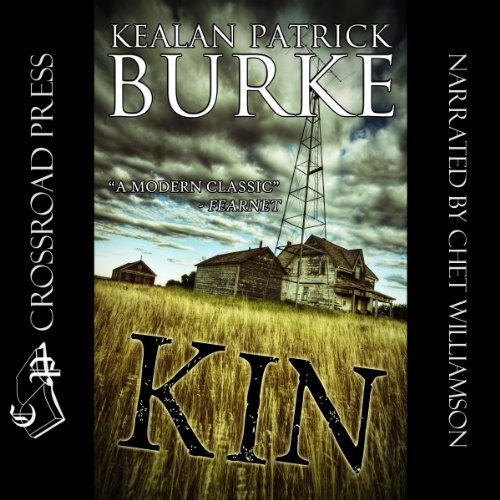 On a scorching hot summer day in Elkwood, Alabama, Claire Lambert staggers naked, wounded, and half-blind away from the scene of an atrocity. She is the sole survivor of a nightmare that claimed her friends, and even as she prays for rescue, the killers - a family of cannibalistic lunatics - are closing in.

A soldier suffering from post-traumatic stress disorder returns from Iraq to the news that his brother is among the murdered in Elkwood.

In snowbound Detroit, a waitress trapped in an abusive relationship gets an unexpected visit that will lead to bloodshed and send her back on the road to a past she has spent years trying to outrun.

And Claire, the only survivor of the Elkwood Massacre, haunted by her dead friends, dreams of vengeance... a dream which will be realized as grief and rage turn good people into cold-blooded murderers and force alliances among strangers.

It's time to return to Elkwood.

In the spirit of such iconic horror classics as The Texas Chainsaw Massacre and Deliverance, Kin begins at the end and studies the possible aftermath for the survivors of such traumas upon their return to the real world - the guilt, the grief, the thirst for revenge - and sets them on an unthinkable journey... back into the heart of darkness.

I love all the inbred books and thought this one would be right up my street,nope it wasn't the story is over before its begun it starts with a victim escaping but what happened to her and her friends does not get a mention only in snippits and you get confused who is who because the story keeps jumping to different characters and places very hard work,if it had started where the teenagers get captured then I think it would have been more interesting.

This book was a hard one to follow. Its a good story but wrote completely wrong. It started off after the event had happened and kept going backwards and forwards from person to person. It was very hard to know where you was and who was who. I thought it was bad writing myself. If Kealan had started from when the kids went into the woods and told the story as it happened instead of bits everywhere it would've been a brilliant story. I was very disappointed especially with the end. It left you thinking what was that all about.

This one needs to be experienced for yourself!

What did you love best about Kin?

The "feel" of Kin had a very old school 70's horror flavor to it. I dug that.

Yes, the plot was full of intense violence, deranged murders and something called "rebirth". Oh yeah.

Have you listened to any of Chet Williamson’s other performances before? How does this one compare?

Who was the most memorable character of Kin and why?

Claire is probably the most memorable. She overcame all odds and is one bad ass chick!

I listened to this book through Audible, and want to take a minute to say that Chet Williamson does a fantastic job portraying the different characters. It took me a while to really get into his narration, it felt pretty monotone in quite a bit of the situations and things kind of bled together. However, when the dialogue was going on, his vocalizations and choice of voicing drew me in to the story enough so that it didn’t seem like just one person narrating.

He was no longer KIN, he was PREY

This was such a great book, some quotes from the book...

“For the first time in his life, he felt the sensation of the trap closing in on him, the jagged teeth descending to rend his flesh and snap the bone. He was no longer kin, he was prey.”

“He had seen his victims piss themselves many times over the years, had even seen the old doctor do it tonight. But he never really understood the kind of fear that could make that happen, make a person forget their dignity and reduce them to the level of scared little children. But as he watched the lithe shape of his father striding toward him, that gun gleaming in the light from the truck, the understanding finally came to him, manifesting itself as a sudden wet warmth at his crotch.”

And that's in just the first hour.

Part X-Files' episode "Home" and part original "Hills Have Eyes" with evil, murderous Southern backwoods (why are they always from the South?) family preying upon hapless travelers. If you like this sort of thing, as I do, you'll probably find this book somewhat entertaining.

"Somewhat" because I wasn't able to listen for a couple days and completely forgot what I'd been listening to. Not super compelling but a fine diversion while weeding the yard.

HE WAS NO LONGER KIN, HE WAS PREY
Burke tries to capture too much in this book. Konrath and Ketchum write these type of stories and they are half as long. They are half as long, because they know that the readers of these stories don't buy them for the characters or the cliché preaching.

DEATH IS EASY, LIVING IS HARD
Everybody in this book is sad or bad. The religion, boyfriend, dad, wife, mother, 2nd mother, police are cliché bad or sad.

CASE CLOSED AND THE CIRCLE JERK GOES ON.
This has some good gory scenes and had lots of potential. I especially liked the REBIRTH scene. There is plenty of gory goodness. If only we did not have to wade through all the clichéd drama.

REVIEWER
One reviewer pines about these stories being in the south. Read Ketchum and Konrath. Ketchum's cannibal trilogy happens in the Northeast. Konrath has a similar story that happens in Michigan.

Interesting twist on the Slasher genre

Beginning this type of story AFTER a victim escapes Texas Chainsaw style killings offered a unique, interesting twist on these types of stories. If you're a fan of "Slashers" I think you'll really enjoy this one!

Pros:
- Interesting, multi-dimensional characters - both the villains & "heroes". Each has their own unique backstory and motive.
- Lots of carnage, but IMO it was never overly gratuitous.
- While the story is straight forward, you get various points of view on the action & plot.
- I really liked the writers style - descriptive, but not overdone.
- The narrator was awesome - added real menace to the story.

I will definitely be checking out KPB's other works.

Woah! All I gotta say is Mama in Bed! Ahhhhhhh! The horror! But then Rebirth! Wow! He went for it! Back woods Hillbilly horror at its best! Up there with Offspring and Texas Chainsaw. Good job! Kealan Patrick Burke!

Blood is thicker than water

This story was dark, twisted , weird and interesting. I really liked the pace of this story. I felt that it flowed well from one scene to the next and was intriguing to listen to the family dynamics of Mama in Bed's brood. I felt sorry that the children had been so poisoned mentally and warped into the awfulness of their beliefs. The brutality that they inflicted upon the "coyotes" was frightful and the fact that they were so willing to turn against their own was disturbing. I liked the outcome for the most part although, I would like to have a bit more information on how the survivors went on with their lives. This is a story of bleak circumstances imposed upon isolated people with a fanatical belief in their religion making them feel righteous in their hideous actions. I was particularly happy that Pete wasn't left completely abandoned. This book was gifted to me by the author for an honest review. Very much a dark disturbing story but I really enjoyed it.

So gruesome-in a bad way

I admit I couldn't finish this one. Just too gruesome. Story was just sick and too many gory details. Please understand I'm a horror lover-books and film-but this just made me sick. Too many horrible topics in one book. It makes for a bad day. And it reminded me very much of the Texas Chainsaw Massacre. If you've seen that, you've got a feeling for this.

Excellent writing and narration combine to make this a very entertaining tale. It's definitely better than I expected going in.