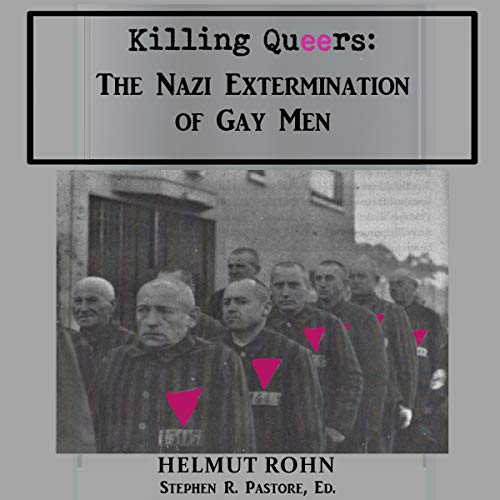 By: Helmut Rohn
Narrated by: Charles Thomas
Try for £0.00

Although Jews and other groups were given reparations and state pensions, gay men were excluded. In fact, gay men in Germany remained criminals, as the 1935 Nazi-legal change was on the books until 1969. Homosexual Holocaust survivors were often re-imprisoned for these “repeat offenses”, even being kept on lists of “sex offenders”. Following the fall of the Nazi government, countless homosexuals were forced to serve further imprisonment, regardless of their time in concentration camps.

What listeners say about Killing Queers: The Nazi Extermination of Gay Men

For all the history availible on the Holocaust, there is surprisingly little on the persecution of gay men under Nazi rule. I think that's unfortunate for many reasons, because these are stories that should be heard and which provide society with warnings about where rampant bigotry can lead. That's what makes this book all the more disappointing.

This book is poorly written. It jumps around from vignette to vignette, simply describing incidents without any context. It's incredibly difficult to follow what's happening at any given time. The author's prose is odd, in several instances he describes sexual assault in terms more sutied to erotica- he describes one of the abusive concentration camp guards as his "lover" for example. To be fair, I do not know if this book was originally released in another language and translated into English- if it was, that would certainly explain the awkward writing style.

The biggest problem of all is the narration. At the risk of sounding hyperbolic, this book has the worst narrator I have ever heard. His speech is choppy, he speeds up and slows down, he stumbles over words, he loses his place and re-reads the same sentence over again. It shocks me that narration this terrible was allowed to remain. It's clear nobody involved gave this a listen before putting it up for sale on Audible, and it undermines the seriousness of the book.

I do not often write reviews this criticial, because I'm generally inclined to focus on the aspects I like. However, this book is flat-out bad. It's rambling, directionless, aloof, and does a real disservice to the topic it covers.