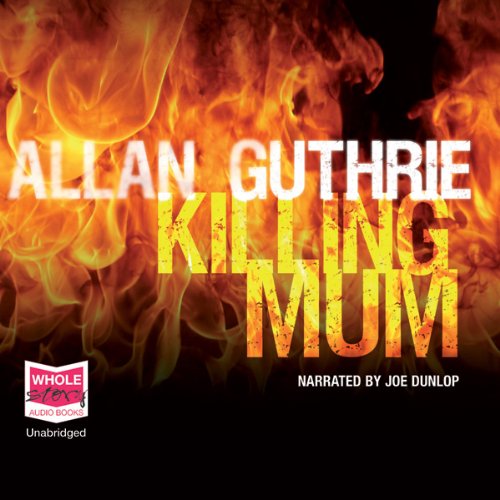 By: Allan Guthrie
Narrated by: Joe Dunlop
Try for £0.00

Using a tanning salon as a front, Edinburgh-based Carlos Morales arranges contract killings. But his hit man's in jail and won't be out for a while. So when an anonymous payment arrives, Carlos decides to take the job on himself. But once the 'mark' is revealed, Carlos re-thinks his plan. This is no longer business - it's personal - because the 'mark' is his mother.

What listeners say about Killing Mum

I give 2 stars because I wanted to finish the book to find out what happened, but really there was far too much uneccessary use of the 'F' word and similar language,(it didn't add anything), the story was actually a bit daft - I am glad it was only a short one as I wouldn't have wasted time had it been a long tale unabridged, as is my usual preference.

The writing style, apart from the bad language was ok and I might be tempted to download a sample of a different book by the author to my kindle to see if it is any better.

cognitive disconnect is hard to write

the narrator was experiencing a breakdown - the reader is similarly confused -I think the unreliable narrator would have worked better if the story had been told backwards or in flashback. going at it in strict chronology left the listener is as confused as the narrator

Would you be willing to try another book from Allan Guthrie? Why or why not?

at the end the author did leave me wanting more. I would like to try a longer book in which he had more time to explore the themes - I would like to see if Allan Guthrie could actually carry this off. don't know if I'd blow a credit - maybe if it was on sale.

What does Joe Dunlop bring to the story that you wouldn’t experience if you just read the book?

He was OK. I think a narrator that really sunk into the chavish banter and dialect of lower class Edinburgh would have brought the story to life better and made it more fun.

Could you see Killing Mum being made into a movie or a TV series? Who should the stars be?