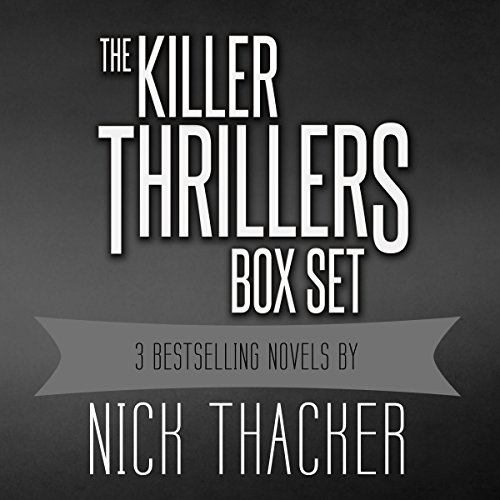 By: Nick Thacker
Narrated by: Mike Vendetti
Try for £0.00

This omnibus box set includes three standalone thrillers that are a great introduction to Nick Thacker's other books. Combining sci/fi thrills with action/adventure, Thacker's books have been described as National Treasure meets Indiana Jones and Jurassic Park meets Leviathan Wakes. For fans of James Rollins, these books are perfect!

In 1791, two men began planning the layout for the nation's capitol city. One is shunned and resigns in disgrace, and the other is all but forgotten. Years later, an original copy of the plans - long thought to have been destroyed - is found, with hastily marked notations by Thomas Jefferson and George Washington.

During the second World War, American military scientists discover some fascinating properties of the hydrogen atom and its link to an ancient mystical number. The exact findings are never published, but a national laboratory is built in 1943 to further their research in covert silence. America is told it is a defense project, code-named The Manhattan Project.

An ego-maniacal entrepreneur and his company, Vilocorp, will stop at nothing to build the perfect human specimen. His firm's research has been getting closer every day, but they seem to have uncovered a horrific, ancient secret that has been locked away for thousands of years.

This is the WORST narrator I have ever heard. Wasn’t there any quality control? Mispronounced words, no inflection, ending a sentence as if it was an afterthought.
The story was good but it was ALL I could do to get through the first story.
We should be paid to listen instead of the other ways around.
It’s GIZA - geezah not gizza. Gallery not galley. Petra peh trah not pee traw.

Mike Vendetti is an excellent narrator and when he' is paired with the thrillers of Nick Thacker you have an unbeatable combination.

3 Techno-thrillers In One Package

This collection contains three great tecno-thrillers by Nick Thacker.
The Golden Crystal spans continents in a race to secure a mystical power source that could provide the "fuel" for a super-soldier project.
The Depths takes a research assistant and her computer programmer husband to a long abandoned base, deep beneath the ocean to find her kidnapped son, and maybe save the world.
The Enigma Strain features park warden Harvey "Ben" Bennett in a struggle to thwart a nefarious plan to plant a nuclear device in Yellowstone National Park and use the resulting explosion to distribute a virus which could wipe out much of the world's population.
Three great, edge of your seat stories with strong, engaging protagonists and science that's convincing.
A great collection for folks who are fans of Tom Clancy and Clive Cussler.

A twist to hold interest

Good sci.fi stories, that were different and keep your interest. The author always has a different spin to his stories. Given audio for my voluntary review and my honest opinion