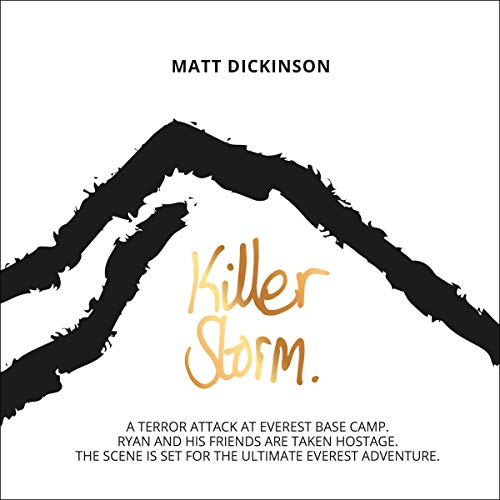 By: Matt Dickinson
Narrated by: Stewart Crank
Try for £0.00

Killer Storm: the third and final book in the Everest Files trilogy by Matt Dickinson.

Teenage climber Ryan Hart is still in Nepal, working at a refugee center with his Tibetan girlfriend, Tashi. His obsession with summiting Mount Everest is as strong as ever, but a climbing accident puts his plans on hold.

As soon as Ryan recovers, he and Tashi journey deep into the Himalayas. Old friends have come back into their lives and invited them on the adventure. On the way they discover disturbing news: Nepal's summer rains have failed, and the country is in chaos. There are riots in the cities. Bandits roam the hills.

As they arrive at Base Camp, a violent terrorist attack kicks off. Ryan and his friends are held hostage.

Escape is their only option, but all the trails are guarded. They must head for Everest's deadly slopes. The friends battle against the elements to keep one step ahead of the terror leader as the chase intensifies....

The scene is set for the ultimate Everest adventure.

What listeners say about Killer Storm