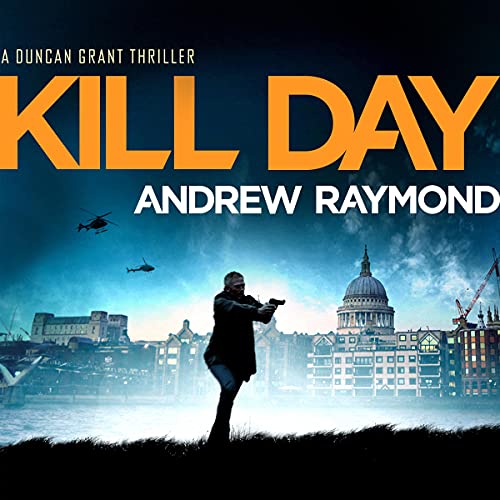 By: Andrew Raymond
Narrated by: Joshua Manning
Try for £0.00

A legendary MI6 assassin has gone rogue. And only one man can stop him.

When a routine covert operation ends with the murder of a vital contact, all the evidence points to legendary MI6 assassin gone rogue, Henry Marlow.

Tasked with taking him down is a loner with a brilliant mind. A rookie operative ready for his first kill. And the man being groomed to be Marlow’s successor - Duncan Grant.

But as Grant hunts his target across the globe, he uncovers evidence that threatens to expose an agency traitor and a conspiracy involving some of the most powerful people in the world.

And now they will stop at nothing to terminate Grant.

As he unravels their deadly plot, his only chance of survival is to outwit and outlast the most lethal assassin in the agency’s history. As the body count mounts, one thing is for sure....

There’s nothing Grant won’t do to get the truth.

Kill Day is the first book in the internationally best-selling Duncan Grant series. Join the heroic Scotsman on the glamorous streets of Paris and the Hamptons, to Grant’s windswept home on the Isle of Skye.

The author of the best-selling Novak and Mitchell series will keep you up all night with his trademark twists, gripping suspense, and globetrotting escapist action.

If you like Robert Ludlum's Jason Bourne, David Baldacci’s Will Robie, and Daniel Craig's Bond, this addictive series will leave you telling yourself "just one more chapter".

What listeners say about Kill Day

Cracking story and excellent narration makes for a top quality audiobook. Let’s hope Audible don’t do their usual and ruin things by bringing in a cheaper “stock” narrator for the next book in the series. Going on form, we’ll end up with some posh boy playing it camp for book two.

Great first book in what i hope is to be a long series. Looking forward to book 2.