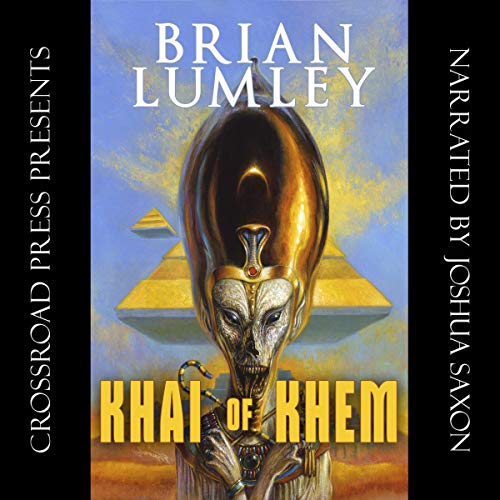 By: Brian Lumley
Narrated by: Joshua Saxon
Try for £0.00

Considered by many to be among Brian Lumley's greatest works, the exciting Khai of Khem is little-known in the US. This time-traveling adventure story spans centuries and cultures in Lumley's trademark mix of horror and science fiction, much like his internationally-best-selling Necroscope series. Like the Necroscope novels, Khai of Khem is packed with fast-paced action, hair's-breadth escapes, all-consuming love, endless horror, and, in the person of Khai himself, quick wits and bravery in the teeth of danger

Khai begins life in ancient Egypt as the son of Pharaoh Khasathut's chief architect. Believing Pharaoh to be a god, Khai is stunned to learn that the supposedly great and wise leader is a shriveled, ancient fossil of a man whose chief desires are to deflower young virgins and achieve eternal life through the powers of his black magicians. When Khai dares to raise a hand to Pharaoh, he is condemned to be a slave.

Escaping, Khai flees to neighboring Kush where he earns the rank of general in the army of Queen Ashtarta...and a place in Ashtarta's bed. In the heat of battle against Pharaoh's armies, Khai is betrayed by his best friend and falls victim to the evil spells of Khasathut's magicians, who send his soul winging centuries into the future.

In modern America, Khai searches for the reincarnated souls of his love, Ashtarta, and of his betrayer. Khai is amazed by many of the wonders of the modern world-television, air conditioning, and especially guns, bombs, and other weapons. Returning to his own time, Khai uses the technologies he saw in the future to rewrite the past. But will he and Ashtarta be in time to prevent Khasathut from attaining immortality and using newly-gained alien powers to destroy all of Khem and Kush?

What listeners say about Khai of Khem

Story had potential but wasdisjointed and hard to follow at times. Waste of a credit

Khai of Khem is one of Brian Lumley's few standalone novels. It is a truly epic story set in a fictional period of ancient Egypt's history. At times the adventure is quite dark and disturbing. There are many scenes of torture, rape and bloodshed. It certainly would appeal to fans of Game of Thrones.
A story of this scale requires a narrator of supreme skill to really do it justice. Joshua Saxon handles this epic masterfully. He expertly delivers the large cast of characters with seeming ease. His characterisation of the evil pharaoh Khasathut is a particular standout.
Kai of Khem is a superbly written and excellently narrated audiobook. Highly recommended.

One of Brian Lumley's finest work. A stand alone masterpiece unlike any of his other stories.

Joshua Saxon's performance was SUPERB, and frankly, one of his best...Mr. Saxon only gets better and better.

Pretty good, though a bit uneven...

I've never read or listened to any book by Brian Lumley so I didn't have any particular expectations,.. And now, after finishing "Khai of Khem" I might say: it's pretty good but a bit uneven...

I liked the general plotline; Khai's story, his need for revenge, the background theme of a God-king as merciless as you can imagine that almost everyone wants to kill (well, somehow this plotline kind of brough Stargate movie and series to mind all the time...:)) - all these elements made for a good tale. But on the other hand, I found some events, some plotlines either unfinished or totally unnecessary for the tale, things that might have been skipped without any harm for the book at all - on the contrary, leaving them out would make the pace a bit faster... An example of such: I don't really think we need the whole idea of souls' time travelling for the story to make sense anyway; I know it is supposed to be about ancient magic and it is supposed to add mysticism to the tale, but the book would work equally well without it - there is too little of it to make it an attractive and engaging storyline and it just slows down the pace...

As for the violence some reviewers mentioned, yes, it is there - there's a lot of bloodshed and there are scenes of rape and torture - but considering the times the book is set in I don't think there's too much of it (well, it's rather mild, in fact, when you think of it...).

As for the characters and the world building: definitely Khai's character is the most developed one; he is the center point of the book so we get to know other characters kind of through and because of him, maybe that's why they sometimes seem a bit schematic, two-dimensional, easily forgotten. There are some, however, which feel real and full-bodied, though they only appear for a moment... And if you don't know anything about ancient Egypt and its neighbours, you may find the world the book is set in a bit confusing with all the ancient names of countries and peoples, and the history of conflicts between them... So again, the book is uneven in this aspect.

But generally it's quite a good tale if you like books set in ancient times, describing ancient wars and ancient customs and beliefs, and if you don't really care if the pace of the tale isn't too fast.

As fo the narration, I generally liked it. The pace of Mr Saxon's reading is good (no need to speed the book up:)), the characters are recognizable and the voices tey are given match their personalities. The only thing that kind of started bothering me somewhere around the half of the book was the very solemn way he's reading - I started feeling as if I was sitting at a very serious historical lecture in a museum...:) Maybe if he wasn't so serious, the book would "sound/feel" faster...? But overall it's a nice interpretation of the story:)

I enjoyed parts of this story.We start in a possible pre Egypt,Egypt.There was so much blood and cruelty I almost stopped.The rest of the book was ok. Joshua Saxon was a terrific narrator.I was given this free review copy audiobook at my request and have voluntarily left this review.'

I love gross stuff and lovecraft, def a lovecraft tie in and def a few really gross parts!

Joshua Saxon does another amazing job.

I loved this book years ago when I read it and now it was an excellent experience to hear it come to life!

Epic Fantasy with an outstanding Narrator!

Khai of Khem is set in ancient Egypt. Brian Lumley is known for his work in the horror genre and I am not normally a fan of horror but there is enough action and magic to satisfy many readers. There are definitely grim and horrific scenes that are aptly described that was chilling. I do have to recommend Joshua Saxon's outstanding narration - his diction is precise and clear. Terrific narration that kept the story flowing. The only reason I can give the story 4 stars is that there were some disturbing scenes to me but definitely well done if horror is your favorite genre. The central character, Khai, is heroic and sympathetic.

Note:
"I was given this free review copy audiobook at my request and have voluntarily left this review."

An odd foray into a (very) fictionalized pre-Egypt

Before I get too far into this review, let me just say first that I feel the back cover description is misleading. The Cthulhu references in this book are very slight and vague, and not nearly enough to draw any sort of parallel. If you enjoy Lumley's work mainly for his Mythos stories you may want to skip this one.

With that being said, however, this is an interesting Sci-fi/fantasy/horror/time travel/historical/#HardToClassify story that draws together several different timelines and when all is said and done tells a really interesting story of pre-Egyptian times.

About the audiobook narrator:
Joshua Saxon has a pleasant, eminently listenable voice and an impressive ability to draw multiple distinct voices and accents. He has excellent control of vocal inflections and his tempo shifts throughout the text are spot on.

With the way the story is put together, it makes sense that it would do so. But I still feel it would have done much greater justice to the material if it had been split into a trilogy rather than a single novel.

That aside, however, I have to admit that there are a few things throughout the novel that I absolutely did not see coming, which is always refreshing.

Although the historical period is very obviously fictionalized (hence, not terribly accurate), it is a well-drawn version of Egyptian history that couldn't help but feel extremely compelling.

The characters are all well-crafted in typical Lumley fashion, each with their own unique quirks that make them feel like real people. Larger than life people in this case, of course, but real nonetheless.

Now, apart from the odd structure that was a bit jarring, my only real complaints are the same ones you'll see in numerous reviews on this book. The sheer level of racism, sexism, and sexual violence is a bit staggering. However, most of it also feels authentic to the setting. The one exception being the number of women throwing themselves at the protagonist. I found that bit a little absurd.

All that aside, however, in the main this book is entertaining and thought provoking.

Which leads us to the ending.
I can't say I got the ending I wanted, but this is a Lumley book. Things rarely work out the way we would like. What I can say, however, is that the ending comes together in a very Lumley way, in which it is both satisfying and frustrating and incorporates details that I really should have seen for what they were but didn't.

I enjoyed it! The narration was good. The author did a good job with the character builds and plot! I look forward to reading more books by this author. I was given this free review copy audiobook at my request and have voluntarily left this review.