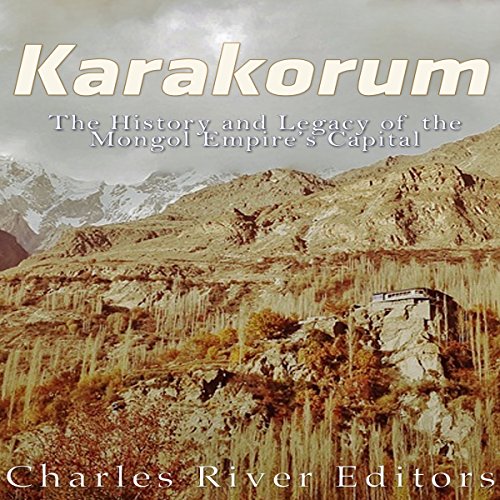 Karakorum: The History and Legacy of the Mongol Empire's Capital

About 225 miles west of Ulaanbaatar, the present-day capital city of Mongolia, are the ruins of Karakorum, the ancient capital of the Mongol Empire. Located in the Orkhon River Valley, at the foot of the Khangai Mountain range, the city was founded by Genghis Khan in 1220 CE. Under his son and successor, Ögedei Khan, Karakorum grew into a thriving city, with high walls enclosing an urban landscape of brick-built structures and paved roads, divided into different districts with a palace, craft workshops, and marketplaces. Under Ögedei and his successors, Karakorum became a cosmopolitan hub of crafts and exchange along the great Silk Road trading network.

Genghis Khan followed the tradition of his nomadic predecessors when he founded Karakorum in the Orkhon Valley. The landscape had previously been settled by many different nomads and empires, including the Huns, Turks, and Uyghurs. These different cultures - despite existing over vastly different periods of time - found common ground in the Orkhon Valley. There they demarcated sites of significance with structures that have survived to the present day, a rarity in the archaeology of nomadic peoples. Archaeological material dating to the Paleolithic period through the Bronze and Iron Ages has been found in the Orkhon Valley, and later monuments include the memorial sites of the Turks, who maintained an extensive funerary area around the Bilge Khagan and Kul Tigin memorials in the sixth and seventh centuries CE, and the Uyghur capital city of Ordu-Baliq from the eighth and ninth centuries. Each of these people left their mark on the landscape, and in the mythologies of the ancient conquerors of the Eurasian steppe, so it is no wonder that the far-flung Mongol Empire considered Karakorum in the Orkhon Valley to be their capital.

The story of Karakorum did not end with the decline of the Mongol Empire either. From the 16th century onwards the area became the center of Mongolian Buddhism, a fact underscored by the presence of Erdene Zuu, the earliest Buddhist monastery of the Mongols. Erdene Zuuh was built upon the ruins of the Khan's palace in Karakorum. There is also the nearby Buddhist monastery of Tövkhön.

Archaeologists have been investigating the ruined city of Karakorum and other sites in the Orkhon Valley since the 19th century, and to this day it remains an active heritage landscape, where ancient traditions are preserved by modern nomadic communities. Karakorum: The History and Legacy of the Mongol Empire's Capital looks at the varied and storied history of the site. You will learn about the Karakorum like never before.

What listeners say about Karakorum: The History and Legacy of the Mongol Empire's Capital

appalling narration - book shouldn't be available to download. Tried to persevere but not even sure it was a human voice reading. Completely distorted any sense or comprehension of the book. Have returned.

first rate short narrative about the ancient site of Karakorum, from beginning to present. lots of straightforward facts crammed into just over the hour with no messing about. amused me that the narrator couldn't pronounce 'steppe' correctly. such an important word here, in this context!