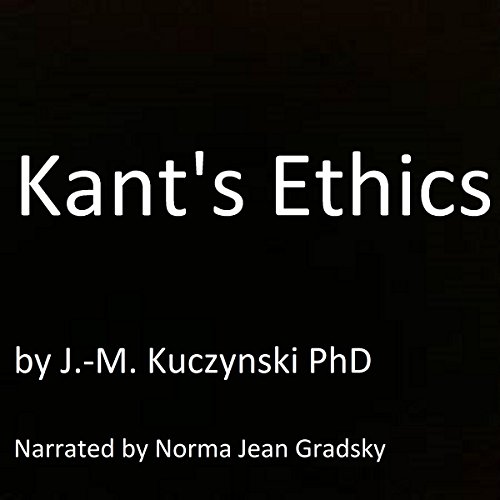 In this book, Kant's ethical system is clearly stated and carefully critiqued. In the process, cogent answers are given to the following questions:

A must-listen for anyone interested in philosophical psychology, moral epistemology, or Kant interpretation, this brisk monograph provides a long-overdue alternative to the dreary and opaque tomes on which Kant aficionados have thus far had to rely.

What listeners say about Kant's Ethics

An enjoyable and easy to grasp short review

This was a well executed critique of the strengths and weaknesses of Kant's ethical discourse. Whilst I suspect many a Kantian will undoubtedly argue the author is somewhat partisan, I feel due recognition is given to Kant's strengths whilst his obtuse and densely packed 'misses' are accurately identified and dispatched. A very enjoyable essay.

The depth and precision of the author's reasoning.

She is articulate and lyrical.

If you could give Kant's Ethics a new subtitle, what would it be?

What made the experience of listening to Kant's Ethics the most enjoyable?

the only book about Kant that is either entertaining or informative.

What other book might you compare Kant's Ethics to and why?

none. this is the only book about kant, or by kant for that matter, that is good. the kant 'experts' are verminously bad.

Norma Jean Gradsky is awesome. She turns this discursive work into a flowing poem.

That rationality is about universal principles.

Yes, if you want to understand Kant, get this book.

Would you consider the audio edition of Kant's Ethics to be better than the print version?

What was one of the most memorable moments of Kant's Ethics?

I love the discussion of rationality

Which character – as performed by Norma Jean Gradsky – was your favorite?

this was an analytical piece, not a play

yes, the story about the intelligent but irrational scientist

the narrator is fabulous, the author is a brain

What made the experience of listening to Kant's Ethics the most enjoyable?

It was almost literary, and yet it really made think much more deeply than I usually do.

What was one of the most memorable moments of Kant's Ethics?

The discussion of rationality, how it is different from intelligence

Have you listened to any of Norma Jean Gradsky’s other performances before? How does this one compare?

This was my first. I was very impressed!

If you could give Kant's Ethics a new subtitle, what would it be?

If you could sum up Kant's Ethics in three words, what would they be?

What other book might you compare Kant's Ethics to and why?

maybe strawson's book on kant, but this was better, because it moved faster and was clearer

she was fab! a great actress, she made this analytical snooze piece sound like shakespeare

the rationality of morality

good writing, but the topic was boring