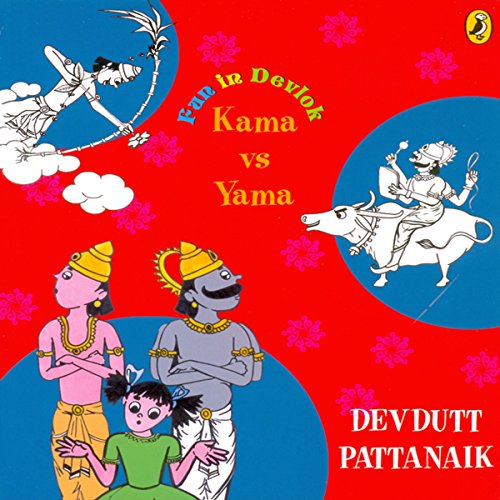 Jayshree loves doing homework! But one day, instead of studying, she hears voices out in the garden and goes out to see who’s there. She meets a strange man called Kama. Poor Kama was made invisible by an angry Shiva once. Now that Jayshree can see him he shows her all the magic he can do - make butterflies appear, bees buzz, fill the garden with fragrant flowers. But then Yama appears, and he does not like playing at all! Yama believes only in working. Kama and Yama start fighting about who Jayshree will be friends with. Who do you think Jayshree will choose - the fun-loving, naughty Kama, or the stern, no-nonsense Yama?

Who made Kama disappear? Why is Yama always so serious? Will the two ever stop fighting?

What listeners say about Kama vs. Yama

Adorable Story for All Children (and adults too!)

Where does Kama vs. Yama rank among all the audiobooks you’ve listened to so far?

I am a fan of Devdutt Pattanaik's books in general (the audiobook recording of Jaya: Mahabharata for example is fantastic), and this children's book conveys the same fun, intelligent, and very informative spirit of his other books. The audio performance is also very good: the reader does different voices for the different characters (a little girl, Kama the god of love and Yama the god of death but actually the god of Dharma, duty).

Pattanaik weaves so many different Indian myths and folktales into this short little book. These are stories that would appeal to anyone!

My favorite is the story of the children who do nothing except what they are told! (Yes, as you can imagine, the parents end up being not very happy about that at all.)