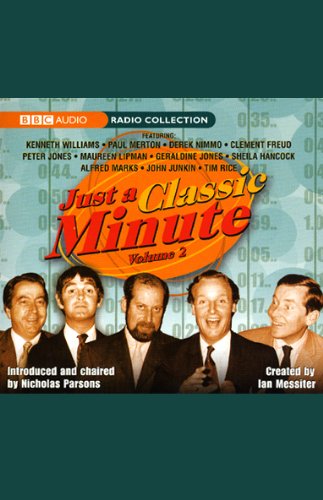 By: BBC Audiobooks
Narrated by: Nicholas Parsons
Try for £0.00

Since 1967 Nicholas Parsons has chaired the evergreen BBC Radio 4 comedy quiz game, in which contestants must speak for one minute on a given subject without hesitation, repetition or deviation (in other words straying from the subject). The programme was made popular by the likes of regular panellists Clement Freud, Peter Jones, Derek Nimmo and, of course, Kenneth Williams, whose outraged outbursts and extreme insults are legendary.

Today, although many of the original regulars are no longer alive, the series continues to thrive, still under the stewardship of Nicholas Parsons and with the contributions of many of our brightest comedy stars.

What listeners say about Just a Classic Minute, Volume 2