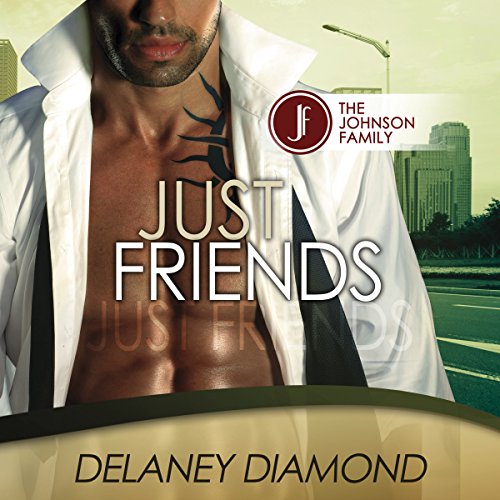 Should they risk their friendship for a chance at love?

Alannah Bailey is tired of being the boring best friend of Trenton Johnson and decides on a makeover. After the changes, she starts dating, but instead of being happy, Trenton acts like he wants to keep her under lock and key.

Trenton is used to partying and having his pick of women. Such an advantage comes with the Johnson name, their money, and his own good looks. When he needs downtime, he depends on his best buddy, Alannah. But he doesn't like the changes he sees in her lately, and by the time he figures out why, it might be too late.

What listeners say about Just Friends

loved the book it was funny and captavating I enjoyed every moment brilliant. . .

Epic Book so passionate and intense.

i LOVEd this Book it was epic!!!! i have re-read it several times and it never gets old. it one of my top 3 DD books. and voice reader was soooo good! highly recommend

I wasn't buying the "best friendship"

This pair was supposed to be such good friends that there were codependency issues. I understand that it stems from the hero, Trenton's childhood trauma, but I dont understand how a pair that had absolutely nothing in common (a stereotypical be-speckled nerdy woman and an alpha male with a high sex drive) are best friends. I wish that the author would have made a believable connection with them by having them share a hobby like songwriting, sports, kung fu movies, SOMETHING! We are just told that she goes to a lot of his family's high society functions. *shrug* I did appreciate Trenton's struggle before realizing his love for Alannah and I wasn't bored at anytime while reading this (although the Macy's incident was unnecessary and silly enough for me to skip it on my second listen). Lastly, the narrator, Michael Pauley, does a fine job when he reads Diamond's other books whenever the hero requires an accent. But as other reviewers had said, he can be robotic and slightly annoying. I loved him in "The Wrong Man", but I had issues with him in this one.

I think I would’ve enjoyed the story more but the voice of the narrator was so distracting. All the Male voices sound like out of breath robots.

Would you listen to Just Friends again? Why?

YES, YES, YES. This book had everything in it that I look for in a story. I enjoyed the whole book.

I like the two leads, Alannah and Trenton. They were wonderful together, it was a perfect fit. They seriously completed each other.

I have listen before and this was a wonderful read. I enjoyed how he changed his voice when it was a different character.

So many moments moved me. But when Trenton is asking Alannah not to leave him and he would find her any job she wanted there and not to punish him if she forgave him. Loved It.

This voice is not for me

This voice just ruined book, I tried to listen but I can't. No emotion what so ever. I'm so sorry, I hate to be negative but I just can't.

I can’t enjoy the book because his voice is terrible and robotic. I want to like it but he doesn’t know the lingo and his inflection doesn’t match. I just can’t.

This story dealt with real life issues and the ups and downs in relationships. A lot of the book was hilarious; especially Trent’s inner thoughts related to Alana. Narration was perfect; brought out each character. Looking forward to listening to the next book!

I thought this book was better than Book 1. I liked the idea of the friends to lovers romance so this was an enjoyable listen. The narrator sounded auto-fical so you have to bypass that and listen to the words. Not sure the writers style and imaginative story-telling are for me. I may revisit them at a later date.

Wasn’t sure about the hero in this one. He was so possessive and abusive that it eventually came off as unattractive. I didn’t like or dislike the heroine but I didn’t think the hero deserved her.

I love a friends to lovers story. Like hardcore, and I did enjoy this story a lot but the hero made what could have been a five, a 3.5. I read the books out of sequence so maybe it would have been helpful to read them in order. Overall I liked it. I just hate mean, toxic heroes.

This best friends to lovers story is about Trenton and Alanna. The love for each other was obvious to Everyone. They were each other's rock, through thick and thin. Their chemistry was so so hot!!🔥

Trenton and Alana are the sweetest couple! Glad Trenton finally got himself together and admitted that he was truly in love!