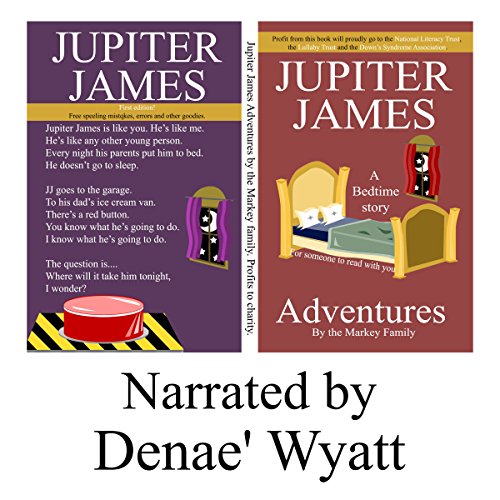 By: The Markey Family
Narrated by: Denae' Wyatt

Now, the Markey children have come together to release an escapade of new stories to be retold for generations to come.

Meet the dinosaurs on planet Mercury and see how Jupiter James will stop its erupting volcano from destroying them all.

Meet Mr. Original Spy on planet Venus, and help Jupiter James spot all the other spies.

Meet Yellow Duck on planet Mars, and hear how Jupiter James stops Dictator Goose, who is on the loose!

Finally, meet Saturn's younger brother, Sammy Saturn, stranded on planet Jupiter who is, sadly, unable to get into orbit. Can Jupiter James possibly get Sammy Saturn into orbit?

What listeners say about Jupiter James

Danae Wyatt has done a brilliant job recording the audio for Jupiter James. Fun, cheery and with a very good pace. Can't wait to share it with my little brothers and sister who came up with the original stories!