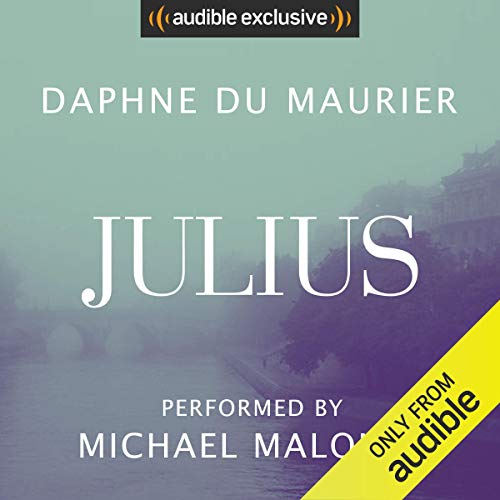 By: Daphne Du Maurier
Narrated by: Michael Maloney
Try for £0.00

In this Audible Exclusive production, acclaimed actor Michael Maloney narrates the disturbing tale of Daphne du Maurier’s third novel, Julius. A dark and unsettling story, Julius follows the almost sociopathic tendencies of an aspirational Frenchman who will stop at nothing to achieve his dreams.

Julius is a bleak and disturbing tale of one man’s unstoppable rise to the top and the shocking events that ensure he gets there. A dark twist on the typical rags-to-riches storyline, Julius follows the life of a young and ambitious French peasant (Julius Lévy) from his squalid life on the banks of the Seine to the vast majesty and wonders of London.

With the outbreak of the Franco-Prussian War, Julius is forced to flee for Algeria, where he soon learns the art of deception. Here, the listener is provided a glimpse into the mind of one of the most unlikable characters in literature. Now alone in the world, Julius manipulates everyone he can, aided by his intelligence and cunning, he cares nothing for the feelings of others and discards them without hesitation whilst he continues his relentless ascent.

A deeply unsettling, yet fascinating tale, Julius is a story that will resonate with the listener long after its final words have been spoken.

Born in London, but having spent most of her life in Cornwall, Daphne du Maurier wasted little time in pursuing a literary career. Remarkably, at the age of just 26, Julius became her third published novel. Du Maurier was famously shy and reserved, rarely providing interviews and choosing not to refer to herself as Lady or Dame - both of which were titles she had been granted. Though not as well-known as her later works, notably Rebecca, My Cousin Rachel, and Jamaica Inn, Julius contains all the elements of suspense and unpredictability which fans have come to expect and enjoy.

Michael Maloney has been a regular face for the viewing public on both stage and screen for over two decades. He is best known for his performances as Prime Minister Sir Robert Peel in The Young Victoria, as Sandy Pabblem in Notes on a Scandal, and as Louis the Dauphin in Kenneth Branagh's 1989 film adaptation of Henry V. More recently, Maloney has also been lending his voice to radio dramas, video games and audiobooks, with over 70 of his narrated titles available on Audible.

What listeners say about Julius

A lesser known but outstanding book from Daphne du Maurier.

Not as well known as Rebecca or My Cousin Rachel, but just as outstandingly good. The portrait of the driven and immensely successful Julius Levy, rising from the gutters of Paris and Algiers to wealth beyond dreams in London and then, finally, Paris. A life that begins with nothing and ends with nothing. What does it merit a man to gain the world ... A book that has intrigued and haunted me over the years. A parable and an inspiration. So good to re-live this saga through Audible.

having rediscovered Daphne Du Maurier I am working my way through her titles. I hadn't heard of this title before and was a little wary due to other reviews. I loved it. The story is good and i really enjoyed the narration which is acted rather than read.
Highly recommended.

I love Michael Maloney's acting, but his reading is too histrionic for audio books. I was gripped by the story, but couldn't stay with it because of the reading. Shame.