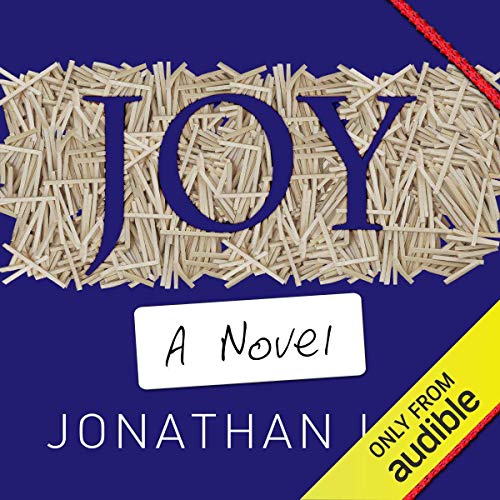 By: Jonathan Lee
Narrated by: Mandy Weston,Rupert Farley
Try for £0.00

Did she jump? Did she fall? Will she wake? On an ordinary Friday afternoon in the office, talented young lawyer Joy Stephens plummets forty feet onto a marble floor. In the shadow of this baffling event, the lives of those closest to her begin to collide and change in unexpected ways. There is Dennis, her disgraced husband, who finds consolation in books; her colleague Peter, whose refuge is a mix of hedonism and hard work; Barbara, Joy's prickly PA, who'd be content if only she could get away to New York; and Samir, Joy's hygiene-obsessed personal trainer, who escapes into exercise routines and other, stranger rituals. In a sparkling glass office in London's Square Mile - a place bursting with flirtations, water cooler confrontations and dangerous amounts of abject boredom - each of them is forced to question what they've witnessed, and to face past moments that have defined Joy's life, as well as their own.

Jonathan Lee was born in 1981 and lives in London. His first novel, Who is Mr Satoshi?, was nominated for the Desmond Elliot Prize 2011 and shortlisted for an MJA Open Book Award 2011. The BBC's Culture Show programme recently featured him as being one of Britain's 'best new novelists'.

“A brilliant book... Jonathan Lee is one of those rare, agile writers who can take your breath away.” (Catherine O’flynn, author of What Was Lost)
“With its supple prose, ingenious structure, wit and slow-burn sympathy, Joy is a sly miracle of a novel.” (A.D. Miller)
“Exquisitely and surprisingly written.[Joy] proves that Lee is a significant talent and that his future work should be well worth awaiting.” (Observer)

What listeners say about Joy

Joy is one of the best audiobooks I've come across this year. It's moving without being too heavy. The author tells the story in a very interesting and funny way.

One of the most memorable moments in the book is when Joy describes the deterioration of the relationship with her husband. She expresses how the events in her life have slowly extinguished the life inside her, and that her husband can smell the death in her hair.

Mandy Weston's narration is great. However, Rupert Farley's male characters tend to be annoying at times.
Overall, Joy's story of depression and the events that led up to it is told in a moving yet humorous way. The story is absorbing with believable characters. For me, it was an audible credit well spent.

This story in particular, with its My-Name-Is-Red like multiple narrators and direct address, really suits the audiobook format. Lee's writing creates an identity and purpose for the reader, and kept me gripped and often laugh-out-loud amused from beginning to end.

The characters are vividly developed; the writing is talented and engaging; but overall I found this book quite depressing: I guess, the author goes too deep into small-ish thoughts and motives of his people, and while it's a great skill and an overall plus, it left a very downing impression on me. I enjoyed the unconventional ending. I almost want to give it four stars, although, initially, I settled for three.

So slow paced, it almost stopped

The novel opens with a slow tedious scene of revelation that becomes obvious to the audience way before the main character clicks about what is going on. The pace does not improve from that point. Essentially, the novel is an examination of the thought processes and deliberations of 5 people, each gradually revealing a piece to the puzzling question of whether Joy jumped or was pushed. Unfortunately, each of the 5 people are unlikeable, whinging characters, whose lives appear small, tedious and terribly boring. By the end of the never ending wading through all the moaning and complaining, when we might actually get the answer to the question, who cares? The narration was very good. Both narrators did indeed make their characters sound self involved and small minded.