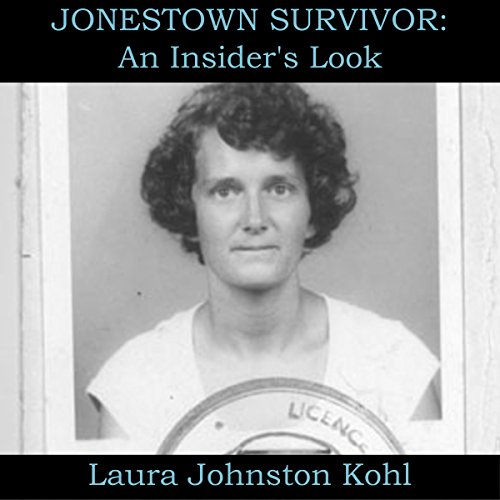 Laura Johnston Kohl was born in Washington, D.C., and was a teen activist working to integrate public facilities in the Washington, D.C., area. She actively fought for civil rights and free speech, and against the Vietnam War throughout the 1960s. She was devastated by the murders of her leaders in the 1960s - John Kennedy, Bobby Kennedy, Martin Luther King, Malcolm X, and Medgar Evers. She worked with the Black Panthers and attended Woodstock. After trying to effect change single-handedly, she found she needed more hands. She joined Peoples Temple in 1970, living and working in the progressive religious movement in both California and Guyana. A fluke saved her from the mass murders and suicides on November 18, 1978, when 913 of her beloved friends died in Jonestown.

Soon after this, Synanon, a residential community, helped her gradually affirm life. She lived in Synanon for the next decade. In 1991, she got to work, finished her studies, and became a public school teacher. On the 20th anniversary of the deaths of her wonderful friends and adopted family in Jonestown, she looked up fellow survivors of the Jonestown tragedy. Since then, they have worked to put the jigsaw puzzle together that was Peoples Temple. Her perspective has evolved as new facts have cleared up mysteries and she has had time to reflect. Her mission continues to be to acknowledge, write about, and speak about why the members joined Peoples Temple, why they went to Guyana, and who they were.

She lives with her family in San Diego. She is working on her second book, Collateral Damage, about the surviving victims of the Jonestown catastrophe - to be published in 2018.

What listeners say about Jonestown Survivor: An Insider's Look

This book offers a very shallow and almost idyllic account of life in a sect with a few critical concessions, like the tragic death of 900 people (painted as something almost accidental that would have never happened if the sect leader hadnt abused drugs). The author, still brainwashed and under the spell of her long deceased sect leader, even praises herself for this unconventional and fresh perspective. In her delusional mind she does not seem to be aware that the idylic life promised by most sects leaders does not exist and the price that has to be paid for the delusion is abuse and, in extreme cases like this, a death of 900 people. This delusional perspective actually forced me to buy an another memoir by Deborah Layton, a former high rank member of the sect. Fortunatelly this account offers a very detailed account of a systematic abuse and cruelty suffered by the members of the sect.

It’s such a pity that this delicate story is spoiled by stilted, ineptly emphatic narration and clunky editing glitches.