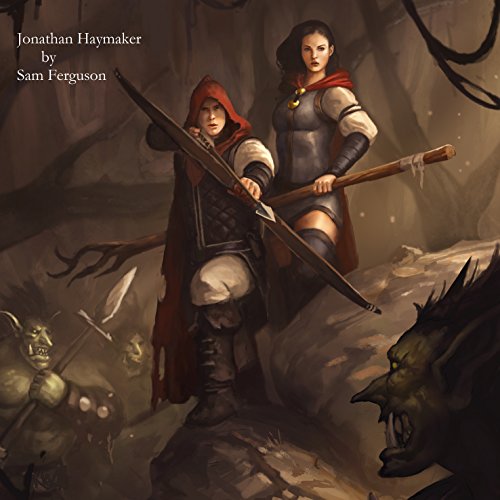 By: Sam Ferguson
Narrated by: Eric Finkenbiner
Try for £0.00

Jonathan is not the strongest young man in his home village. That would be his older brother Jason. He isn't the tallest, best looking, or funniest either. Again, that would be Jason. He is better than most in the village at archery, though. He is an excellent hunter, and can perform more trick shots than anyone else with amazing accuracy. Well, he is almost better than anyone else. Jason has him beat there too. Jonathan doesn't mind though, he and his older brother share a deep bond that connects them more fully than their differences could separate them. They work together in their family fields, go swimming at the fishing hole, and sometimes they play tricks on other farmers in the village. Whatever they do, for good or ill, they do together.

On Jonathan's 16th birthday though, officers come to the village asking for volunteers. Trolls have invaded during the heaviest monsoon season ever known, and the wet conditions have given the trolls enhanced abilities. Jason is the first to step forward, and is eagerly accepted for his height and strength. Though he also volunteers, Jonathan is told he is too young, and not strong enough for the rigors of war with the trolls in the Murkle Quags.

When letters stop arriving from Jason after two years of war, and Jonathan still finds himself denied acceptance to the army due to his small stature, he does what any good brother would do. Jonathan Haymaker takes his bow and leaves his home. They said it couldn't be done. The journey was too far, the dangers too great, and the war too fierce for a boy like him. Perhaps they were right, but he knew Jason was alive somewhere, and he was not about to let his brother be alone.

What listeners say about Jonathan Haymaker

Its a simple way to waste some time

The book is simply written. The storyline predictable. Generally, those items are ok, but the combination with the reader and a sub-standard audio product, really brings the book down.