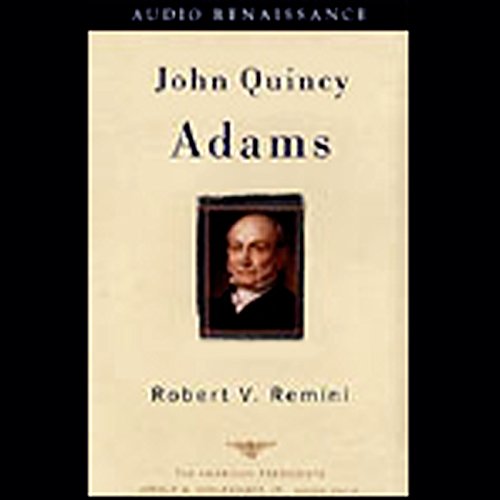 Robert V. Remini, Professor Emeritus of History and the Humanities at the University of Illinois at Chicago, offers us a fascinating portrait of a brilliant and complex man, and of a truly influential American life. Heavy were the burdens of John Quincy Adams' upbringing. Son of the forbidding John Adams and the domineering Abigail, puritanical New Englanders both, he was driven from the earliest age to a life of faith, observance, and public distinction - a life that was considered to be his birthright, and his obligation. While his natural tendencies were toward a contemplative life filled with art and literature, his path was pre-destined - the law, and then public service. It is no wonder that later, as a grown man, accomplished and admired, he was spoken of as cold and austere, even misanthropic.

Adams' career suffered little from his demeanor. A learned and well-traveled intellectual as well as a shrewd negotiator, Adams rose through the diplomatic ranks, eventually serving as a dynamic and influential secretary of state under President James Monroe. In this role, he helped solidify many basic cornerstones of American foreign policy, including the Monroe Doctrine. The greatest triumph of this period was undoubtedly his negotiation of the Transcontinental Treaty, through which Spain acknowledged Florida to be a part of the United States.

Eventually, Adams arrived in the White House, chosen by the House of Representatives after an inconclusive election against Andrew Jackson. His administration, however, had less of a long-term impact than much of Adams pre- and post-presidential endeavors. He often failed to mesh with the ethos of his times, pushing unsuccessfully, for example, for a strong, consolidated national government. After leaving office, Adams served nine consecutive terms in the House, earning the nickname "Old Man Eloquent" for his passionate anti-slavery oratory.

"No one who reads this fine, short study will fail to place Adams in the pantheon of Great Neglected Americans, which is just what Remini hopes to achieve and does." ( Publishers Weekly)
"Capable and thoughtful...Does Adams justice and well serves to acquaint readers with a neglected leader." ( Kirkus Reviews)

John Quincy Adams did not have one of the great Presidencies, eventually giving way to Andrew Jackson. But he lived an extraordinary life, from witnessing the Battle of Bunker Hill as a child, to serving as ambassador to Russia, to time as Secretary of State and later President, then back to the US House of Representatives (one of very few Presidents to ever return to Congress after leaving the White House), to his famous representation of the slaves who revolted on the Amistad. This is a medium length introduction to this former President and does a good job of covering all the bases.

Too short. No emotion in reader.

I’ve listened to a few presidential biographies, in order. This one hinted at more interesting stories but failed to tell them, except in a sentence or two. Very little description of what happened during Adams presidency or afterwards. And not enough description of his relationship with his wife and children. The reader’s voice was flat. Disappointed. Should have been better book.

Focuses on his negative relationship with his mother, does not deal with presidency as much as I would like.