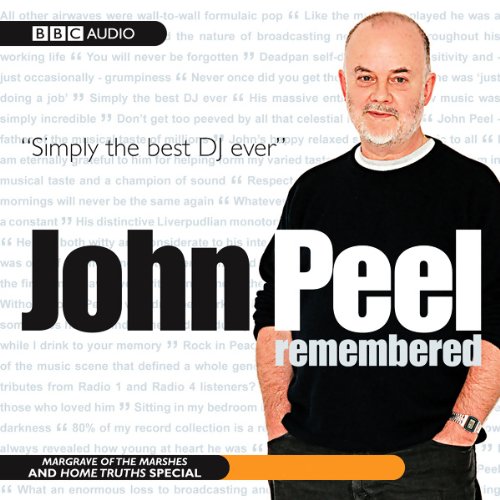 A Brief Reminder of a Great Man.

Anyone who's into BBC audio material will know that they often do a good line in posthumous tributes. Whether it's Humphrey Lyttleton or Alistair Cooke, the BBC always seem to do warm tributes to its best broadcasters in a way that is unsurpassed anywhere else in the media.

This album is no exception containing, as it does, two of the many special broadcasts made in his memory.

The first of these is the Radio 4 serialisation of Margrave Of The Marshes (his unfinished autobiography, which was completed by his wife).
Although not narrated by John or his wife, the two narrators sound just like them and do an interesting double act, where Michael Angelis reads the book up until when Sheila Ravenscroft comes into the story, at which point the other narrator takes over. In other words, the parts written by John Peel are read by a man (who sounds eerily similar to him) & the parts written by his wife are read by a woman.

One more thing to be added about the Audio book is that it seems to be a heavily abridged version (only an hour long), but all the essential detail (from birth through to his final years) is succinctly covered.

The second Broadcast is the 'Home Truths' tribute to John Peel. This album has snippets of John speaking about family & also the family contributing material & insights into John's personality. In the process, as the presenter (Tom Robinson) hints, we learn that they're not nearly as odd as John made out!

There are also little nuggets, such as a section on the 'John Peel Special' train in Norfolk that was named after him, and the story of the Gomersall family, who are (bar one person) all lifelong members of the Salvation Army.

All in all, this is an interesting tribute. It doesn't seem as long or as thorough as I imagine other tributes are (e.g. 'John Peel - a Tribute'), but it is short enough to leave you wanting more & long enough to give you a real flavour of the man himself.

A huge part of my early years and a constant thereafter. This audio book is a treat. But is a bit short.

An Adequate Summary of John Peel

As of when I am writing this, there was no other Biographical or Autobiographical books on John Peel available on Audible, and I definitely learned a lot from it. There are weird format choices, primarily due to the fact that this an old radio broadcast, and not a true audio book.