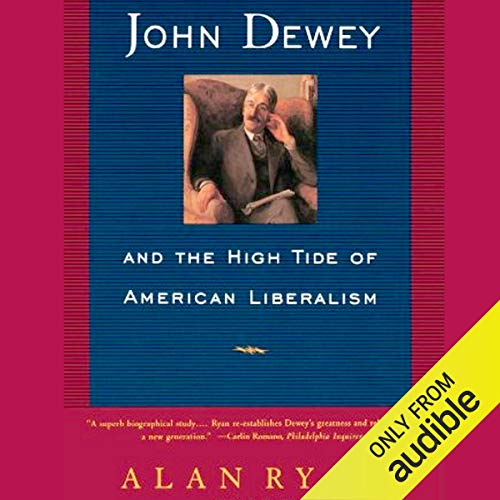 When John Dewey died in 1952, he was memorialized as America's most famous philosopher, revered by liberal educators and deplored by conservatives, but universally acknowledged as his country's intellectual voice. Many things conspired to give Dewey an extraordinary intellectual eminence: He was immensely long-lived and immensely prolific; he died in his 93rd year, and his intellectual productivity hardly slackened until his 80s.

Professor Alan Ryan offers new insights into Dewey's many achievements, his character, and the era in which his scholarship had a remarkable impact. He investigates the question of what an American audience wanted from a public philosopher - from an intellectual figure whose credentials came from his academic standing as a philosopher, but whose audience was much wider than an academic one.

Ran argues that Dewey's "religious" outlook illuminates his politics much more vividly than it does the politics of religion as ordinarily conceived. He examines how Dewey fit into the American radical tradition, how he was and was not like his transatlantic contemporaries, why he could for so long practice a form of philosophical inquiry that became unfashionable in England after 1914 at the latest.

This is a very well-written biography that works nicely as an audiobook for those who take some interest in Dewey. Robert Westbrook's biography, John Dewey and American Democracy, is probably more authoritative, but Ryan's book moves along more briskly, is reasonably comprehensive, and is pleasing to listen to. Ryan is British, and it's interesting to hear Dewey discussed in relation to developments in the UK, Bertrand Russell, Karl Marx, and European thinkers on social democracy. I'm listening to it at the same time as Jonathan Sperber's book on Marx, and although the biographical strategies are very different, the contrast between the two men's lives and thoughts are illuminating.

Summerer's voice is pleasant and his narration is generally unobtrusive, but I can' figure out why no audiobook narrators (or editors) can figure out how to pronounce names like Weber and Foucault. It's jarring. There are a couple of editing errors, like pauses or repetitions, that should be taken care of, but it's not a huge problem.

Exactly what I hoped for!

Although written some years back, this book is still an immensely valuable resource on Dewy, but more importantly on the entire intellectual and some of the political zeitgeist of that interest period of time before and after the first world war.

The author does and admirable job laying a context for and then explaining Dewy's ideas, but goes beyond that to give very thoughtful opinions about how Dewy's ideas were received and even how they stand up today (in the author's day).

The narration is impressive and all one could ask for in a book such as this. Summerer is one of the best out there!

Alan Ryan’s work gives the reader a clear exposition of Dewey’s main ideas, their meaning and role in his intellectual development. The book is readable, the text clear and fluid. Alan Ryan examines Dewey’s works in context and establishes a dialogue between the american philosopher and his critics (of the past and contemporary). Dewey’s concept of education, experience and pragmatism are well exposed and criticized. The idea of democracy that emerges from Dewey’s reflections is linked with communitarianism and pluralism. One can easily get such things when they get rid of metaphysics. This is an excellent introduction to Dewey’s work.

I came to this book as in introduction to Dewey and his educational philosophy to supplement my "father of progressive education and hands on stuff" understanding of his place in educational history. I am so glad I read this book first, before any of his own or even any books on just his views on education. A broad look at him situated in the philosophical, historical, political and social context of his times (and quite long times they were!) provided so much more insight and understanding that simply reading his own books or educational books about him could ever do. It is so easy to lose sight of the intellectual life of the past, so this book is especially revelatory for someone in my generation. I would highly recommend, especially as an in-depth, accessible introduction to the man and his influence.