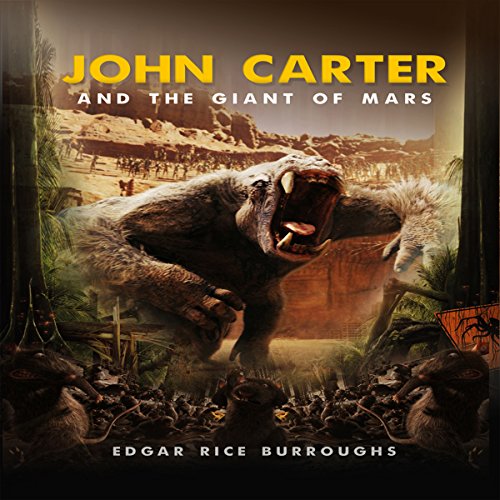 John Carter and the Giant of Mars

John Carter and the Giant of Mars

John Carter and the Giant of Mars is part of the famous Barsoom science fiction series, written by Edgar Rice Burroughs. Co-written with his son, John Coleman Burroughs, it follows the story of the adventurous Carter and the princess he loves, Dejah Thoris. As the book opens, the two of them are attacked, and Dejah is carried away, leaving Carter to wonder whether he will ever see her again. He calls on his friend Tars Tarkas to help, but their journey to recover the princess is an eventful and sometimes dangerous one. Among other encounters, they have to face a city populated entirely by rats - not to mention, of course, the giant of Mars - who is no less than 130 feet tall! This tale is full of incident and variety, as well as a range of fantastic and memorable characters, making it a book that readers of all ages will take to their hearts.

Not ERB at his best - but nice to have

If they are into the John Carter series, then yes. For non-series reader, probably not. The style is quite dated and not the best in the series.

John Carter himself. The concept of an Earthman moved to Mars and there, becoming a hero.

It was fine. Melodramatic and fitting for the time and style of the writing.

Do you think John Carter and the Giant of Mars needs a follow-up book? Why or why not?

No, sadly, this was one of the last, uncompleted stories of Burroughs when he passed away. Better to remember the writings at their height.

An ok story - mostly for the completist. Listening it is very similar to listening to a radio dram similar to a Flash Gordon or Buck Rogers. If you like those, you may well enjoy this.

Too short, but was at least an exciting new story for those of us who who have been missing some new ERB.

I love the John Carter series. The story is very original.
But with the last few books. as with this one. You can tell Burrough's is getting tired of JC.
Still loved to hear the story. But this one is my least favorite