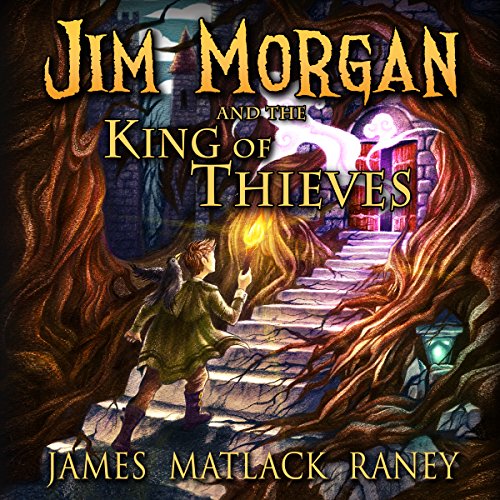 Jim Morgan and the King of Thieves

Jim Morgan and the King of Thieves

A gypsy curse. A shadow pirate. An ancient treasure. An adventure beyond mystery and magic! Eleven year-old Jim Morgan once had a home, a life of comfort, and a future full of promise. But all that changed the night his father was murdered.

Now Jim is on the run from his father's enemies, a wicked count and his vengeful son, and at the same time, trying to decipher the secret to the last mystery his father left him - the hidden location of an ancient treasure. But standing in Jim's way is an army of pickpockets, led by a master criminal, known only as the King of Thieves, and around every corner, Jim finds dangerous foes, new allies, and more magic than he ever knew existed. If Jim can survive, he may discover a hero hidden within himself, and a destiny beyond his wildest dreams.

Where does Jim Morgan and the King of Thieves rank among all the audiobooks you’ve listened to so far?

Best audiobook so far - I've listened to a lot so that must say something!

Jim of course! I'm sure he reminds us all of our childhood and how we imagine ourselves doing great things.

What does Patrick Conn bring to the story that you wouldn’t experience if you just read the book?

Patrick deserves merit for his excellent performance. He is evidently invested in the spirit of the book - if I hadn't had known otherwise, I would have said he was so invested in it, it's like he wrote the book himself.

The revelation of his fathers secrets.

I really loved this book. The audio version is extremely well acted and I found myself smiling all the way through. The author has a great skill in his choice of words; he manages to use relatively few to paint a full picture in your mind - I found it very easy to imagine myself, like a fly on the wall, watching the story unfold. The story is well suited to the suggested age group of 8 to 12, and it has a perfect balance of humor and educational (historical) story telling. In short, I really enjoyed this book –, it was fun, gripping, and made me smile often. Highly recommended and I look forward to now reading his other titles.

Such an awesome story. Chapter 25 was my favorite. Fun for all ages. The end definitely leads you to want more.

If you could sum up Jim Morgan and the King of Thieves in three words, what would they be?

What was one of the most memorable moments of Jim Morgan and the King of Thieves?

Christmas, when Jim is given money and what he does with it.

Which character – as performed by Patrick Conn – was your favorite?

I listen on my commute, so I never listen in one sitting

A really fun story. You begin hating a character and end up caring about him as he grows up and becomes the person his father had hoped. The side characters, specifically the Ratts, Lacey and Cornelius area all great parts of the story and add so much heart.

I would definitely listen to "Jim Morgan" again! This book is the perfect mix of excitement, mystery, magic and humor. It was really cool to experience Jim's evolution over the course of all the tragedies and adventures he was thrown into.

The reader Patrick Conn's British accent helps bring the world (London) to life, his animated voice and distinct character choices were also lots of fun to listen to.

I enjoyed joining Jim on his incredible journey. The book is very well written and transports the reader into Jim's world; I felt like I was going through everything with him. This book is fantastic and enjoyable at any age! Can't wait to read more from author James Matlack Raney.

Jim Finds the Meaning of Treasure

If you could sum up Jim Morgan and the King of Thieves in three words, what would they be?

Wonderful tale about a boy who has lost his way, both emotionally and physically, and with the help of new friends discovers the world.

What was one of the most memorable moments of Jim Morgan and the King of Thieves?

When he discovered what treasure truly is.

Well written and narrated book suitable for both boys and girls (as there is a stand out girl named Lucy, who will inspire everyone), young and old. The pace is quick and steady, with wonderful adventures, endearing characters, and magic in the form of Baba Yagga (plus a bit more). The book can be read on it's own, but there is enough information as to inspire one to quickly pick up book 2..if only it was available on audible :(