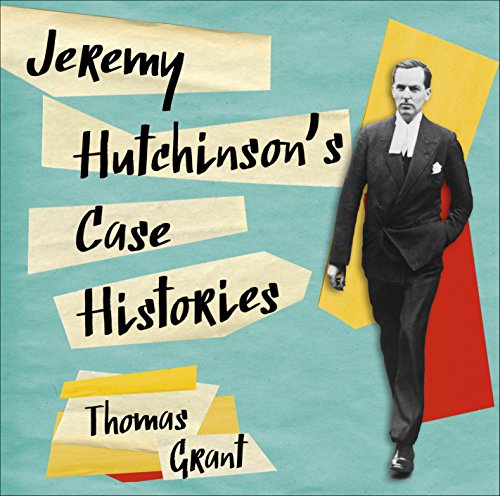 By: Thomas Grant
Narrated by: David Timson
Try for £0.00

A compelling portrait of the time when freedom of speech and the need to throw off censorship came to the fore, told through its great trials, from Lady Chatterley's Lover to Howard Marks.

Born in 1915 into the fringes of the Bloomsbury Group, Jeremy Hutchinson went on to become the greatest criminal barrister of the 1960s, '70s and '80s. The cases of that period changed society forever, and Hutchinson's role in them was second to none.

Accessibly and entertainingly written, Case Histories provides a definitive account of Jeremy Hutchinson's life and work. From the sex and spying scandals which contributed to Harold Macmillan's resignation in 1963 and the subsequent fall of the Conservative government to the fight against literary censorship through his defence of Lady Chatterley's Lover and Fanny Hill, Hutchinson was involved in many of the great trials of the period.

He defended George Blake, Christine Keeler, Great Train robber Charlie Wilson, Kempton Bunton (the only man successfully to steal a picture from the National Gallery), art faker Tom Keating, and Howard Marks, who, in a sensational defence, was acquitted of charges relating to the largest importation of cannabis in British history.

He also prevented the suppression of Bernardo Bertolucci's notorious film Last Tango in Paris and did battle with Mary Whitehouse when she prosecuted the director of the play Romans in Britain.

Above all else Jeremy Hutchinson's career, both at the bar and later as a member of the House of Lords, has been one devoted to the preservation of individual liberty and to resisting the incursions of an overbearing state. Case Histories provides entertaining, vivid, and revealing insights into what was really going on in those celebrated courtroom dramas that defined an age as well as painting a picture of a remarkable life.

"Throughout a long career, [Jeremy Hutchinson's] brilliant and stylish advocacy achieved success in cases that looked unwinnable." (Helena Kennedy)
"Jeremy was not just a good lawyer; he was fearless in standing up to judges. He was the most formidable advocate of the 1960s and '70s and he had a marvellous sense of mischief." (Geoffrey Robertson)

What did you like most about Jeremy Hutchinson's Case Histories?

I was amazed at how one man could have been involved in so many significant legal cases that shaped Britain towards the end of the 20th Century.

Hutchinson's own story of each case he was involved with was preceded by a very adequate potted history of its background and significance. This helped greatly to put his involvement in context.

Have you listened to any of David Timson’s other performances? How does this one compare?

No, but I look forward to hearing him again. This is a long book, but he struck exactly the right tone and pace to keep the stories vivid.

A Brief's History of Time

I hadn’t heard of Jeremy Hutchinson before but remember many of the important cases he was involved with as a defence counsel. His first widely-reported case in the early 1960s was the obscenity trial against DH Lawrence’s book, Lady Chatterley’s Lover. Among many famous trials in which he was defence counsel included that of Christine Keeler; the spy George Blake; the civil servant Clive Ponting and journalist Duncan Campbell. Other ground-breaking obscenity prosecutions he defended included the film Last Tango in Paris and the play Romans in Britain.

Altogether a fascination and entertaining series of trials that also plot the gradual liberalisation of society and, at times, reveals how out of touch the establishment and judges could be with public opinion.

The book starts with a short biography of this humane and liberal-minded man. His background was privileged not least by his acquaintance with many of the literary and artistic figures. He was married to the actress Peggy Ashcroft for many years.

The last chapter of the book is a critical essay by the barrister dismayed by the curtailing of legal aid and consequent lack of justice for people who cannot afford to pay for the best legal counsel. The Minster for Justice at the time of writing was Chris Grayling who comes in for excoriating remarks about his competence. At nearly 100 years old Jeremy Hutchinson probably didn't fear a libel trial and could probably defend his comments vigorously!

The reader is excellent.

As a practising lawyer of some 18 years, this book provided a timely professional stimulus.

an illuminating book. The workings of the criminal bar in a series of fascinating cases. The final chapter is something every one should hear.

If you are interested in social history, criminal law, or good biography, you are likely to love this.

If this had not been a book I had wanted to enjoy I would have abandoned it very early because of the pomposity of the narrator.

It should not be a vehicle for the narrator but the bringing to life of a story. Be warned he thinks he is more important than the story he is telling.

A very accessible history of some of the great social events of the last 60 years seen through the career of one of the heroes of the modern age. The narrator also shines in this sparkling gem!

Good story read in a RP 20th century style that grates, reader makes bad or needless attempts to mimic a style of speaking that dates.

That said it’s a good range of cases, albeit some like Profumo are of niche interest other than to British Baby Boomer generation.

I enjoyed book but would prefer it be re-recorded by a modern younger voice who thought less of themselves.

I was recommended this book by a friend and I enjoyed every chapter - I didn't want it to come to the end.
Very well narrated, funny in parts, sad sometimes and always insightful. Recommended.

Lovely narrator, but a dull hagiography

There are two reasons I did not like this book. First, the author does not appear trustworthy, including rank speculation that there might have been secret communications between the government and the court in a spy case based on nothing more than the judge having imposed a harsh sentence when Hutchinson requested a lenient one. Second, Hutchinson is lauded for his lofty rhetoric, which is extensively quoted. Thankfully, the legal profession has mostly moved past flowery language to focus on the facts, but either that was not the case when Hutchinson was practicing, or the author decided to take the easy way out and quote lengthy arguments rather than explain the strategies and investigations that led to them. I found it dull and did not finish it.

The intricacy of the advocacy is really intriguing and useful. I wish I had read it sooner.