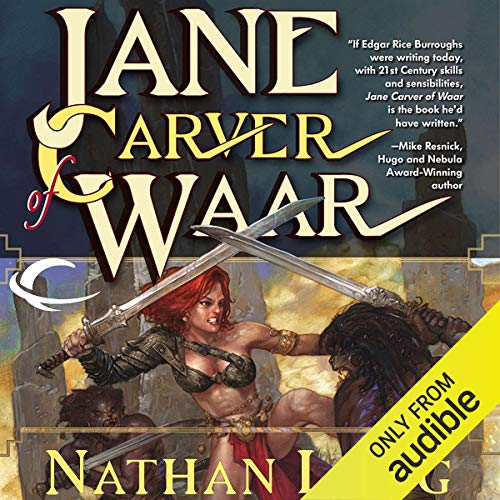 When tough-talking biker babe Jane Carver accidentally deals a death blow to the unfortunate guy who gropes her outside a California biker bar, she makes a run for it - and wakes up naked on an alien planet called Waar. Thus begins Nathan Long's Jane Carver of Waar: Waar, Book 1, a hilarious satire on the ribald, retro space fantasies of the 20th century. Soon, Jane's hopelessly wrapped up in bizarre adventures on this planet of sky-pirates and gladiators, including a bid to help a fallen nobleman win back his sexy space princess. Listeners will be bewitched by actress Dina Pearlman's portrayal of Jane, whose Marlboro-cured voice and confident panache makes her swashbuckling space adventures a delightful listen.

Jane Carver is nobody's idea of a space princess. A hard-ridin', hard-lovin' biker chick and ex-Airborne Ranger, Jane is as surprised as anyone else when, on the run from the law, she ducks into the wrong cave at the wrong time - and wakes up butt-naked on an exotic alien planet light-years away from everything she's ever known. Waar is a savage world of four-armed tiger-men, sky-pirates, slaves, gladiators, and purple-skinned warriors in thrall to a bloodthirsty code of honor and chivalry. Caught up in a disgraced nobleman's quest to win back the hand of a sexy alien princess, Jane encounters bizarre wonders and dangers unlike anything she ever ran into back home. Then again, Waar has never seen anyone like Jane before.

Both a loving tribute and scathing parody of the swashbuckling space fantasies of yore, Jane Carver of Waar introduces an unforgettable new science-fiction heroine. Nathan Long is a screen and prose writer with two movies, a Saturday-morning adventure series, and several TV episodes to his name. His official website is: www.sabrepunk.com.

A thrilling and fast paced pulp action thriller from Nathan Long. Jane Carver of Waar breathes excellence from chapter to chapter and never lets you go. I listened to this from start to finish in a day

I've read John Carter and also the Gor novels so I thought I'd give this one a try given the many positive reviews. I found the overuse of earth metaphors being simply grasped by aliens to unbelievable and tiring. Nothing much original in the storyline. This is the first book from Audible that I would return.

Poor Rip Off of John Carter

Has Jane Carver of Waar turned you off from other books in this genre?

No just this writer

The voices turned me off But mostly the story was lame at best.

What character would you cut from Jane Carver of Waar?

Alright, John Carter of Mars was written in the infancy of Science Fiction. I always enjoyed its simplicity and straight forwardness. The characters in it a two dimensional because of that infancy. This book is less than that. For one, I hate swearing in Science fiction. It is a genre that doesn't need it. 2. I TRIED to get into this book with the same excitement that I have for A Princess of Mars but I just couldn't finish it. The author tried too hard to be like ERB and failed in the attempt.

Story was fun and full of plot twists. The main character doesn't get any until the end.

Shameless but fun knock off.

I enjoyed Burroughs' Barzoom books when I was young. And I enjoyed this shameless copy (homage).

Actually the book might have benefited from less nods to the John Carter novels. And it absolutely would have benefited from less similes- "My heart pounded like the subwoofers on a cholo's Chevy". "The dawn light was like the electric pink of a hookers hotpants". Fun, but she story is so heavy with contemporary "cool" similes, that it actually becomes an annoying immersion breaker.

Still, It's a fun pulp action romp. Won't win the Nobel Price, but I liked it.

Jane is not one of my heroines

It started out interesting but fizzled for me. Jane is not someone I am attracted to I guess I did not relate to her and did not find her interesting.

Was Jane Carver of Waar worth the listening time?

Pulp of the Highest Caliber

Glorious low brow adventure. That might not be enough for some but Dina Pearlman isn't just narrating the story of a big, biker chick caught up in fantastical Flash Gordon sci fi adventures, she bloody well sounds like one. Her performance sounds so beautifully in character that the book could get by with just a so-so story rather than the very charming, trope nostalgic and clever one that it is.

The author does very well in writing a female adventure protagonist that doesn't just come off as just a guy with boobs. Not too feminine, not too manly, very... American Biker Amazon but not a butch one. All very down to earth and free of high minded idealism or grim/dark villainy, definitely a grinning popcorn flick.

Follows a single perspective throughout so if you need a break from constant character hopping ala Game of Thrones, bonus. Also taught me what the "phone book trick" means in police speak. Learn something new every day.

There are two groups of readers for this book: those who have read Edgar Rice Burroughs' A Princess of Mars, and those who haven't.

If you haven't... then you may or may not like this book, depending on your tolerance for old-school sci-fi adventure tales. Because Jane Carver of Waar is not even a little bit subtle about the material it's imitating: it's quintessential "high concept" science fiction, that concept being: what if John Carter was a chick? And of course, if you have no familiarity with the Confederate-gentleman-turned-warlord-of-Mars, then Jane Carver has to stand on her own and you're not going to get a lot of the jokes. That said, it's fun and fast-paced and Jane is kind of awesome in a ridiculous pulp fiction way, but you're only going to love it if you can get into planetary romances with swashbuckling sky pirates and alien hotties wearing nothing but jewel-encrusted dental floss.

There is, however, a modern sensibility to this novel: Jane gets to team up with a couple of mostly-naked princes — to her immense gratification, Waarian men wear as little as the women. And Jane is an unabashedly lusty lass (and for all that, it takes her quite a while to get some).

If you have read the Barsoom books — well, then, this book is a treat. There's always a risk in reading something that is a parody/"tribute" to a classic work: either it will be too earnest and just read like a cheap knock-off, or it will be too acerbic in its satire, or even mocking, as if to make readers who love the original, however cheesy it may be, feel like saps. (Lev Grossman's "The Magicians" is one of the biggest offenders in that regard.)

Jane Carver of Waar is a shameless imitation, but it's a loving one. Jane, an ex-Airborne Ranger biker chick, gets popped off to "Waar" through a magic cave in just the same way John Carter went to Mars, and the adventures that follow are pretty much a mirror of those of everyone's favorite Virginian. The "Orans" are purple instead of red, and instead of initially being captured by green-skinned Tharks, Jane is captured by tiger-centaur Aarurrhs. Exactly like John Carter, Jane finds that Waar's lower gravity gives her superhuman strength and the ability to leap great distances.

There are some divergences because of Jane's sex. She doesn't have a princess to rescue: instead, she befriends a hapless Oran prince named Sai, whose beloved Wen-Jhai was bride-napped by another Oran noble. Sai is honor-bound to meet the dastard's challenge and steal his fiancee back; the only problem is, the other guy is one of the greatest swordsmen on the planet, and Sai is, well, kind of a wimp. And a coward. They make a cute couple, and when Sai's best friend, Lan, joins in the fun, the three of them go from one adventure and narrow escape to another in pursuit of Wen-Jhai.

Jane, being a woman, notices all the sexism that John Carter didn't see fit to comment on in his own adventure, and has great fun shocking and scandalizing everyone from the Orans to the Aarurrh. She's a crude, brazen Valkyrie, but she also gets her butt kicked fairly regularly. Her adventures are perfectly in keeping with the Edgar Rice Burroughs tradition, but told with a 21st century viewpoint.

Edgar Rice Burroughs fans can read this book without fear that it's making fun of our beloved John Carter. It's almost a worthy "sequel" to the Barsoom series. If you haven't read the originals, though, you may well find this book fun, but I'd really recommend reading A Princess of Mars first so you'll catch all the references and winks.

Great performance but story was nothing special. Another present-day heroine with attitude sent to past/primitive society with typical sarcastic remarks at the appropriate situations. Having read a few urban fantasy novels with female leads recently, the typical sarcastic attitude has been getting tiring, despite the great performances of the narrators. Whether it's the performances being similar or the heroine's sassy attitude or the first person perspective, or the combination of all three, which do tend to go together in modern style fantasy these days, I feel like the modern female heroine has consolidated into one personality. I haven't read the John Carter book but saw the movie. This book has such a similar plot that there isn't really any point. The other reviews made me so optimistic that the new take on the story would make it fresh, or extra witty, but it was all just too shallow. If it's trying to be a spoof, it failed dismally.

This book is like a knockoff of "John Carter Of Mars" but it is a VERY GOOD knockoff. The main character feels real and her choices feel more real. Its also more edgey and modern than John Carter which may make it easier to read because of the generation gap. The next book is already out in print and I hope audible will have it soon.