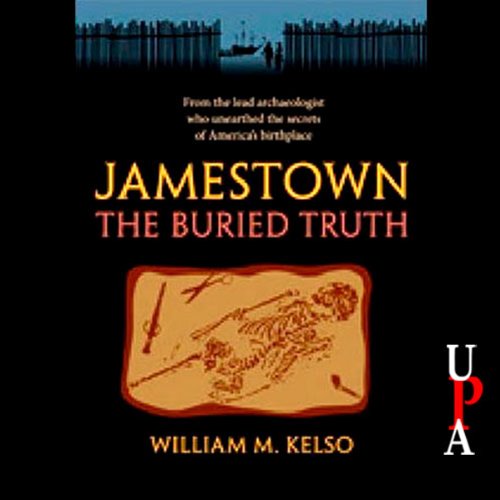 What was life really like for the band of adventurers who first set foot on the banks of the James River in 1607? Important as the accomplishments of these men and women were, the written records pertaining to them are scarce, ambiguous, and often conflicting, and those curious about the birthplace of the United States are left to turn to dramatic and often highly fictionalized reports.

In Jamestown, the Buried Truth, William Kelso takes us literally to the soil where the Jamestown colony began, unearthing the James Fort and its contents to reveal fascinating evidence of the lives and deaths of the first settlers, of their endeavors and struggles, and of their relationships with the Virginia Indians. He offers up a lively but fact-based account, framed around a narrative of the archaeological team's exciting discoveries.

Once thought to have been washed away by the James River, James Fort still retains much of its structure, including palisade walls, bulwarks, interior buildings, a well, a warehouse, and several pits, and more than 500,000 objects have been cataloged. Dr. Kelso and his team of archaeologists have discovered the lost burial of one of Jamestown's early leaders, presumed to be Captain Bartholomew Gosnold, and the remains of several other early settlers, including a young man who died of a musket ball wound. In addition, they've uncovered and analyzed the remains of the foundations of Jamestown's massive capitol building. Refuting the now decades-old stereotype that attributed the high mortality rate of the Jamestown settlers to their laziness and ineptitude, Jamestown, the Buried Truth produces a vivid picture of the settlement that is far more complex, incorporating the most recent archaeology to give Jamestown its rightful place in history and thus contributing to a broader understanding of the transatlantic world. The book is published by University of Virginia Press.

"Excellent... fine writing... [P]recisely the right book at the right time for both specialists and curious readers." ( Richmond Times Dispatch)

What made the experience of listening to Jamestown, the Buried Truth the most enjoyable?

Having been to Jamestown several times, it was great to get the chief archaeologist's insights and story. Despite the set backs, miscues, and disasters, the drive and vision of the people who settled is inspiring. To be sure, these were real, flawed individuals. For me, that makes the survival and ultimate success of the colony remarkable.

What other book might you compare Jamestown, the Buried Truth to and why?

I have read the available primary sources, which are available online. But as Kelso correctly points out, the written record is thin. I also plan to listen to The Savage Kingdom (available on audible!), but haven't yet.

The portions dealing with Gosnold.

No, there is much detailed information to digest. In fact I am on my second listening.

Another reviewer pointed out that the maps and diagrams are needed. I suggest going to historicjamestowne(dot)org for further information.

I love reading and learning about Jamestown since it was such a debacle that no one from America will ever talk about it. However, after listening to this title I learned that it wasn't a complete debacle as I was initially taught. This was a very interesting listen and I really enjoyed the narrator too. I could definitely see this being turned into a TV documentary if it hasn't been already and if it is, I just hope they use the same narrator because he was great and make this that much more interesting!

A fascinating look at America's beginnings told by an archeologist who has literally sifted the evidence at gound level and written a first-rate account of the history of the nation's earliest settlement. The narration is clear and concise.

Kelso does a great job in discussing the finds of his, and the APVA's work over the past 20 or so years. He starts off by telling of how they discovered the site, and then explains many of the most important finds.

The information in this book is wonderful and indepth. Unfortunately, you tend to get a little lost without the pictures in the paper book. So I recommend that you look over the maps before or during listening. There is a web pape where they can be found. The book was much easier to understand after seeing the maps.

I wish I had listened better in school. I would've found out earlier I love history.