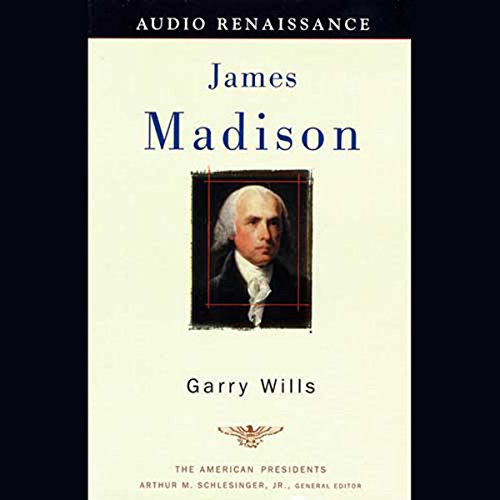 By: Garry Wills
Narrated by: Ira Claffey
Try for £0.00

The eternal conundrum about James Madison - a key framer of the U.S. Constitution, a formidable political figure, and a man of penetrating analytical intellect and tremendous foresight - is why, when he became chief executive, did he steer the ship of state with such an unsteady hand? Why was this man, whose pre-and post-presidential careers contributed so significantly to the future course of American political history, so lackluster and ineffectual in his tenure as president?

In this concise and readable examination of Madison's life and career, Garry Wills outlines the confluence of unfortunate circumstance, misplaced temperament, and outright poor judgment that bogged down Madison's presidency. Though a brilliant theoretician and effective legislator and collaborator, he was not a natural leader of men, and the absence of leadership was keenly felt during wartime. In fact, the War of 1812 was the first foreign war fought under the Constitution, and Madison was forced to adjust many of the assumptions he had made during the drafting of that document. He had to confront hard, practical issues such as public morale, internal security, relations with Congress, and the independence of the military. Though now remembered in part for fleeing the capital as it was under siege, Madison saw his administration come to a close with his popularity on the rise.

Madison's later life, neatly traced by Wills, was also of consequence. For two decades after he left office, he remained tightly bound to the political life of the nation, happily playing the role of popular elder statesman, curiously prefiguring so many of our recent presidents.

"[A] thoughtful and sympathetic evaluation of the complex character that made Madison a great theoretician of government but a mediocre practitioner of it." ( Kirkus Reviews)
"Wills' analysis of the Constitutional Convention and the War if 1812 is particularly fresh and incisive." ( Booklist )

What listeners say about James Madison

I am an avid reader of revolutionary history and love to read founding father biographies where I can find them. I must say that this biography, though interesting, was not a captivating read. I hang with books that are tough or boring, and this book exhausted me. The author spends a lot of time covering everyone BUT Madison. This book is still very interesting as a backgrounder for this period of time, and for early development of U.S. Constitutional doctrine. As the author concedes, Madison left little personal written record behind. Maybe this is the best we will ever see on this interesting and deeply flawed man. If you have time for this book, put it behind Hamilton, Washington, Adams, Lincoln, Robt. E Lee, Grant, and even John Paul Jones. Still worthwhile if you have the time! The music in between chapters made me want to pull my hair out - it sounded like some dreadful NPR air-filler.

Among biographies of James Madison, this recent short treatise by Garry Wills is without doubt the worst, most shallow and frivolous. Instead of history, Garry Wills, professor of "American Culture", provides a critique of Madison's personality. This book is more of an extended opinion piece and modern journalism than biography or history. There is little attempt at insight or balance. The biography provides more insights into Mr. Wills' personality than that of Madison, who is called feckless, provincal, small-minded and resentful. This book, like most of Gary Wills' books, I was unable to finish.

James Madison -short, unattractive physically, in chronic poor health (what was his chronic illness?) - became the father of the American Constitution and the single major influence in creating our Government, at least the better parts of it. His strengths were the force of his intellect and depth of knowledge of government, created by study, self-discipline and ambition. The shortcomings of his presidency reflected the shortcomings of the early American Government, several of which his administration corrected. He led the country through an unpopular war that was forced upon him without a strong treasury, with an overpowerful Congress and with poor advisors and cabinet members, to a victory that established the United States as a truly independent and forceful nation, correcting the many problems left by the Treaty that ended the Revolutionary War.

Madison learned from his mistakes and deserves better treatment than this book provides. At least give him credit for having perhaps the greatest first lady of our country.

For a more complete and balanced biography of Madison, try Ralph Ketcham's "James Madison. A Biography" and for an easier read or listen, Labunski's "James Madison and the Struggle for the Bill of Rights" available on audiobook.

James Madison is a difficult biographical subject, and unfortunately, this book does not live up to the challenge. The book's flaws were exacerbated by the reader -- the narration is both lifeless and akward. Although short, I found this one of the hardest books to finish.

I like biographies but not this one. A very dull book about a very dull man, presented by a very dull reader. Warning: May cause drowsiness. Do not listen while driving an automobile or operating heavy equipment.