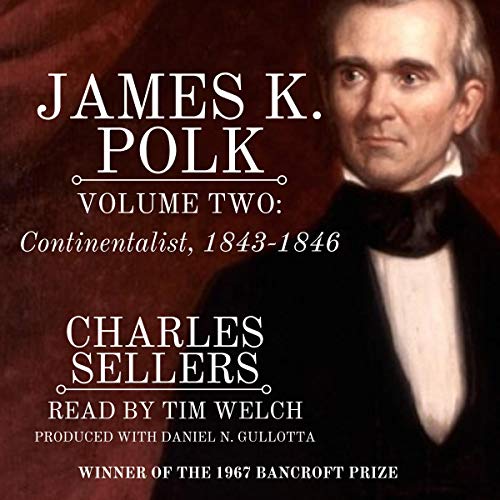 By: Charles Grier Sellers
Narrated by: Tim Welch
Try for £0.00

This definitive biography of James K. Polk covers the most important years of Polk's political career - from a twice-defeated gubernatorial candidate in Tennessee to dark-horse candidate for the presidency and one of the most successful first 18 months of any American president.

The months of Polk’s administration covered here contain the bulk of his expansionist program - the annexation of Texas, the settlement of the Oregon boundary with Great Britain, and the war with Mexico that led to the acquisition of California and New Mexico. This period also covers the first session of the 29th Congress, which produced under Polk’s guidance the most important domestic legislation of any congress of the century.

Is there a Volume III?

Enjoyed the narration by Tim Welch. Lots of details about Polk's administration. Maybe too much detail. Lots of names of people that appear once but are never seen again. My biggest complaint was that the book ended rather abruptly. In fact it ended before the end of Polk's term in office. The author all of a sudden wrapped it up with about 5 or 6 sentences about how Polk's administration was one of the most consequential to date. No mention of how his term ended. No mention of how the Mexican / American war ended. No mention of his death shortly after leaving office. Left me thinking that I missed Volume III but I could not find it anywhere. Other than that I enjoyed the book.


My initial thought about the audiobook is that it would be boring, but I was mistaken. The storyteller grabbed my attention with his tone and pitch of voice. I usually do not listen to Audio podcasts because of my short attention span, but I enjoyed this. I learned a lot about the U.S government, especially the banking system in the US, and democracy. The storyteller's narrative voice was interactive and made the audio interesting. For example, when he reads a sentence made by the character, he changes his voice to fit into the character he describes. I would recommend, especially to students who have to prepare for U.S government exams but arent enthusiastic about reading the textbooks because the storyteller makes it interesting to listen too.