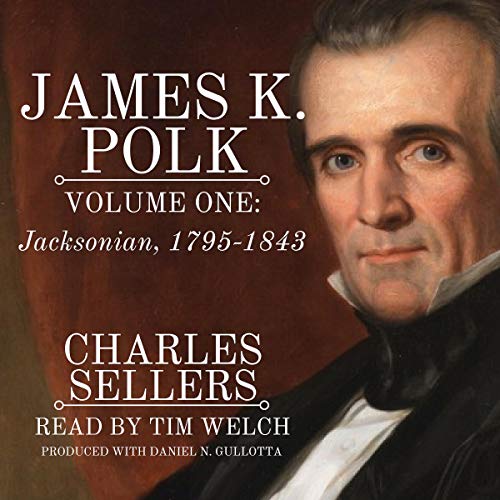 By: Charles Grier Sellers
Narrated by: Tim Welch
Try for £0.00

This full account is of Polk's important pre-presidential career. Since Polk was immersed in so many of the major political developments of his day - the rise of popular democracy, the conflicts over the national bank, and other crucial issues of Jackson’s administrations, and after 1835 the fateful emergence of sectional animosities-his biography is also a history of his generation’s political experience. Professor Sellers has combined the elements with a sure hand, bringing out Polk’s character-his ambition, his determination, his faith in the electorate-and the nature of his friends, his enemies, and the times in which he moved. One feature of the work is the light it throws on the relation between national politics and those in Tennessee.

The delivery is unlistenable!

I have never heard a more clueless reading, every line is given the same weight of accent and cadence as the last whatever the text is attempting to communicate. An A. I. Speech engine, how ever antique, is far more apt to hit the right note than this narrator.

Very detailed book, if you can tolerate the horrible narration. It sounds if the narrator was in a hurry, and reads with no interest and runs sentence after sentence together.

I liked the actual information of the book I don’t think I would ever listen to or read the book on my own, but I did enjoy listening to it for about half an hour. I also enjoyed the way the book was read and the changed in the readers voice. I’m not a history buff that’s why I gave it 4 out of 5 stars. But I did enjoy listening to on the way to the supermarket. If you’re a history buff you’ll definitely like it!

The James K. Polk audio book provides excellent narration with accurate data on James K. Polk and his Jacksonian views. Polk, as we know it, was a member in his time of the Democratic party; and was a protege to Andrew Jackson himself. This book is a good listen for anyone trying to understand more about Polk and his time in the political realm. Polk was a goal setter and arguably can be put in the category of meeting all his goals with regards to foreign policy, and domestic goals. Highly recommend this book.

A potentially great book let down by bad narration

This could be a great book, however I couldn't make my way through it.
The production is not very good, the audio levels are all over the place and some chapters contain so much background noise that I felt like I was listening to AM radio.
And then there's the narrator. I understand that this type of audiobook can be a challenge to narrate and they can be very dry. This narrator tries to make everything sound like he broadcasting the 9th inning of game 7 of the world series when they're down by one and the bases are loaded with a full count! Everything is over the top dramatic, even the most mundane passages seem to have a false sense of excitement.
This for me made the book unlistenable and I gave up after just a few hours.

More about Tennessee Elections than Polk

One of my least favorite American History books I have listened to. When you compare this to a book like American Lion, this is just boring facts about politics in Tennessee. I would not be listening to Vol 2.