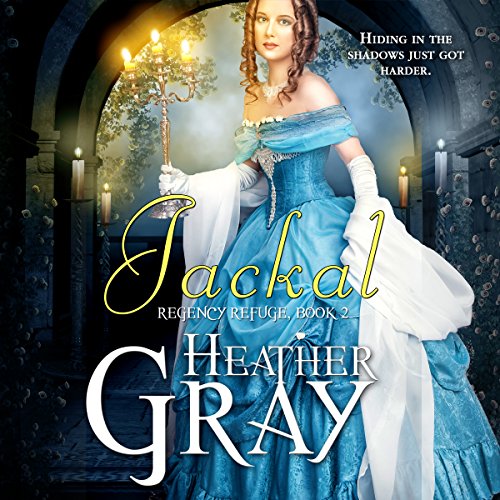 Hiding in the shadows just got harder.

When tragedy strikes, Juliana and her family must flee their home. Can they persuade a virtual stranger to help them? Juliana isn't so sure, especially after their chaperone threatens to cane him. Even as Juliana struggles to trust him, she finds herself drawn to this mysterious man. Surely all she wants from him is refuge.

Rupert is a man whose life depends on his ability to remain unnoticed. What, then, is he supposed to do with this family he's inherited? His life is overrun with an ancient chaperone who would terrify a lesser man, two spirited girls, and the secretive Juliana - someone he comes to think of as his own precious jewel.

With this new responsibility thrust upon him, Rupert will have to make sacrifices - but will God ask him to sacrifice everything?

I was voluntarily provided this free review copy audiobook by the author, narrator, or publisher and found it very entertaining. The second book in the series has a much faster paced plot with more action. The main character is a retired spy for the Crown, but he is stilled entangled by his last assignment when family shows up on his door step. This is a good combination of adventure, suspense and humor.

Unlike the majority of stories I read or listen to (audiobooks), I was left with not a single question by the end of this story. Very rare! Ms. Gray wrote a really good story that made sense. Rupert was my favorite character because he led a very interesting sounding life and it was hard to believe all the injuries he'd sustained. If this were made into a movie, I'd be curious to see the male character chosen for Rupert's part, especially how his body would look after all the scars and injuries were added.

It was entertaining and a clean read. The only part I did not like was the graphic death of one of the of the war department spy's and that jackel was injured again.