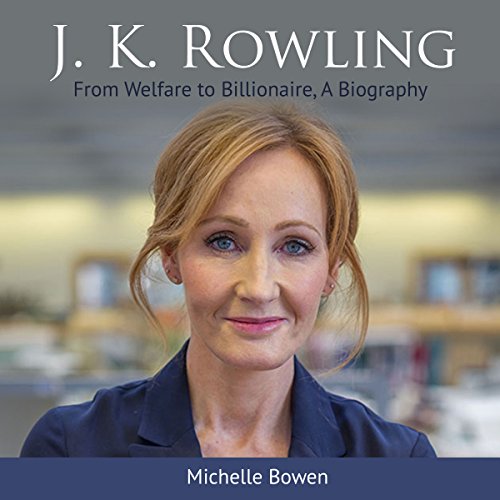 By: Michelle Bowen
Narrated by: Nate Sjol
Try for £0.00

J. K. Rowling is a British novelist, philanthropist, film producer, television producer, and screenwriter who is best known for writing the Harry Potter fantasy series. The books have won multiple awards and sold more than 400 million copies, becoming the best-selling book series in history. They have also been the basis for a film series, over which Rowling had overall approval on the scripts and was a producer on the final films in the series.

Born in Yate, Gloucestershire, England, Rowling was working as a researcher and bilingual secretary for Amnesty International when she conceived the idea for the Harry Potter series while on a delayed train from Manchester to London in 1990. The seven-year period that followed saw the death of her mother, birth of her first child, divorce from her first husband, and relative poverty until the first novel in the series, Harry Potter and the Philosopher's Stone, was published in 1997. There were six sequels, of which the last, Harry Potter and the Deathly Hallows, was released in 2007.

Since then, Rowling has written four books for adult readers: The Casual Vacancy (2012) and - under the pseudonym Robert Galbraith - the crime fiction novels The Cuckoo's Calling (2013), The Silkworm (2014), and Career of Evil (2015).

Rowling has lived a "rags-to-riches" life story in which she progressed from living on state benefits to being the world's first billionaire author. However, she lost her billionaire status from giving away much of her earnings to charity.

Even though she is no longer a billionaire, she is still one of the wealthiest people in the world. She is the UK's best-selling living author, with sales in excess of 238 million pounds. The 2016 Sunday Times Rich List estimated Rowling's fortune at 600 million pounds, ranking her as the joint 197th-richest person in the UK.

Time magazine named her as a runner-up for its 2007 Person of the Year, noting the social, moral, and political inspiration she has given her fans.

What listeners say about J. K. Rowling: From Welfare to Billionaire

Not bad for the price. Still, it felt like a glorified podcast than a well-written biography.

I could have gotten more from Wikipedia for free!

It was 1 chapter, which was my fault I should have checked the length. The recording wasn't clear and very robotic. Also it was less like a story and more stating facts of when she wrote what book and how well it did. I regret buying.

A substantial portion of the already brief runtime is devoted to reading off the release dates for the Harry Potter book and film series. Doesn’t offer any unique insight.

Very short story of her life previous to the books