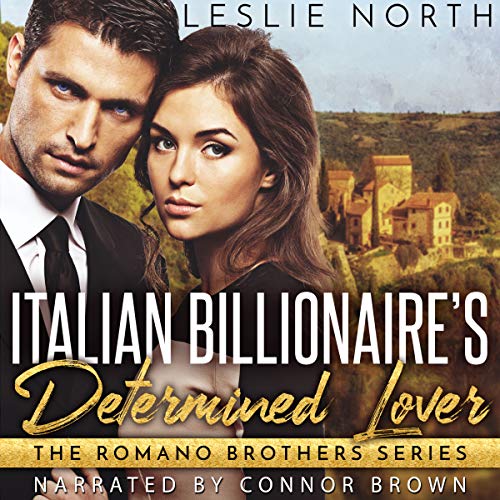 By: Leslie North
Narrated by: Connor Brown
Try for £0.00

Leonardo Romano has made an independent fortune as a boutique hotel magnate. He has the golden touch when it comes to creating luxurious accommodations, but the one thing Leonardo has avoided is following in his Grandfather’s footsteps. Running the family’s original hotel, the Romano Resort, on the island of Sicily, is a job he’s never felt fated to revive. However, now that his brothers have done their parts in securing and remodeling the hotel, it’s up to Leonardo to do what he does best: entice visitors to revel in the lap of luxury.

Stella Brown is on her last strike. As a historical preservationist she’s just committed the mortal sin of losing a historical property to modern renovations, therefore losing a piece of history. Forever. Now Stella is tasked with proving she can still do her job by halting the Romano Resort’s extravagant renovations and getting them to conform to international preservation laws. Stella isn’t a pushy person, but she’s ready to go to war to save this little piece of Sicily.

But Stella finds it’s not just the island that’s stunning: the man who owns the resort is gorgeous too. Beautiful and bold, Leonardo is no stranger to bending laws and women to his will, but in Stella he’ll find a sunny beauty with a spine of steel -- one that’s ready to shut down the hotel rather than see its historical significance erased in swaths of cashmere and gold plated toilets. As the two connect over their desire to see the Hotel Romano refinished properly, they’ll find their views of each other building to passionate proportions. As time runs out and luxury continues to battle with laws, they’ll have to decide if compromise is possible or if everything will turn to dust.

This is book 3 in the Italian Billionaire series. Although this is a stand alone, I’d suggest you start with books 1 & 2. They are short stories and you can easily get thru each at one sitting. I love Leslie’s creativity and the beautiful unique places we get to visit while reading her stories.

Narration was well done and brought the story to life. Connor has a great voice!

Leonardo is one of the Romano Brother’s trying to renovate their family property. All plans are agreed upon until Stella shows up trying to halt all renovations until they agree on something that conforms with international preservation laws.

There is a HEA conclusion after some misunderstandings and some turmoil.

THE NARRATOR SPOKE REAL FAST AND IT TENDED TO GET BORING AFTER AWHILE. THE STORY WAS OKAY BUT AT TIMES I LOST INTEREST

Both care about the building for their own reasons and the love story is completely unexpected and delightful. This is a voluntary review of a copy gifted to me for an honest review. Excellent writing, characters and heart. Very highly recommended.

loved this book. It was great to hear it in audio format as well! you don't get the story of finding love you get to hear a story of passion of a place. Well done

This is the third book in The Romano Brothers. I loved this short and sweet love story. Leonardo and Stella share a strong and beautiful chemistry. I loved their HEA. This story takes place at The Romano Resort in Sicily, like for the first books in the Series. The narration was well done. I received this free review copy audiobook at my request and I have voluntarily left this review.

This is book 3 tomthe series. It’s the end of the series . It’s about the final brother . The brother is stubborn and won’t budge .
Hero is Leonardo. Heroine is Stella .
The three brothers ( you learn about the other 2 in the other books in the series . The three brothers are determined in bring to life the hotel that their grandparents had as living beauty . There is only one problem. It’s the news that Stella delivers. Saying things must be like it was years ago. Meanwhile Leonardo has the talent and skills to bring thevresort to something else

Connor did a great work telling this story. His voice is strong , clear and steady .

Wonderful story. Leonardo and Stella have so many issues and obstacles but the love and chemistry between these two make it such an enjoyable story to listen. Add that to such a masculine strong hot voice and you have a perfect combination

Leslie North's books always pull me in. I loved this book featuring Stella and Leonardo. Their chemistry is outstanding. I so enjoy how the two clashed and yet had determination to get their own way. Business and pleasure mesh perfectly in this fast listen. Connor Brown performs this book brilliantly. He adds the right emotions with his smooth rich voice. I love the imagery in this book, from the little details of the historical buildings and accessories (door knockers) to the hot beach scene. Of the series, this book is probably my favorite. I will definitely listen to more books by this author and narrator.

Italian Billionaire's Determined Lover (The Romano Brothers, #3) was another great read by Leslie North. Leonardo is a billionaire who is running the family's business, The Romano Resort. He meets Stella who is a historical preservationist who wants to stop the Romano Resort's renovations. I loved Stella and Leonardo's story.

Stella and Leonardo are a firework.

Stella and Leonardo are a firework. They set off sparks at first meeting, but the actual burst takes a bit more time. Stella and Leonardo bring a tension that is palpable and a fire that is consuming to their tango of heated words, battered hearts and strong personalities. They bring out the best in each other at the worst of times.