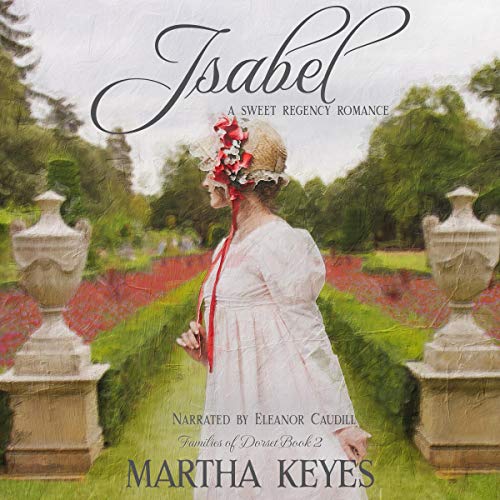 By: Martha Keyes
Narrated by: Eleanor Caudill
Try for £0.00

A gentleman‘s impulsive wager to marry a stranger. A young woman’s determination not to marry the man she wants.

When Isabel Cosgrove is informed by her father that he lost her hand in marriage while playing cards with Charles Galbraith - the gentleman she’s been admiring from a distance for years - she is filled with dismay. How can she agree to wed a man whose reason for marriage is part-revenge, part-indifference? Intent on avoiding a painful union where her regard cannot be returned, she concocts a plan.

Charles Galbraith didn’t intend to become engaged as a result of a drunken wager at cards, but after the woman he loves spurns him, what does it matter whom he marries? But even Miss Cosgrove, the fiancée he won by wager, seems intent not to marry him - a fact that both relieves and piques him. She instead suggests a plan that has the potential to temporarily appease her father’s demand of marriage while also winning back the love of the woman Charles truly wants.

But when Charles and Isabel are thrown into the midst of a brewing scandal and another man’s potential disinheritance, their plan begins to unravel thread by thread, challenging what Galbraith thinks he wants - and just how much more time with him Isabel’s heart can stand.

What listeners say about Isabel (A Regency Romance)

I enjoyed this interesting story. The main two characters are likable and mature. However, I’ve got an aggravating pet peeve. The heroine bites or chews or grips her lower lip every few minutes. Come on authors, please don’t drive us mad with these repetitive, uncreative habits. I assume the lip biting is trying to replace the constant blushing in the previous novel, but please, oh please, try to use these physical descriptions less often. The narrator has a nice upbeat tone for this type of regency, and she captures the atmosphere and scene perfectly. She doesn’t sound like a native British speaker, so it can be a bit sharp on the ears and also, maybe only to me, seems to drift into American South sometimes. But overall, a good narration.

This was a clean regency romance, with characters that I liked, in a story that was just OK.

I really enjoyed the first book in the series, so decided to give this one a chance even though the description did not necessarily peak my interest much. Basically, the heroine of the stories father gambles her hand in marriage to a man who is reeling from a rejection and drinking too much. Out of honor, he decides to fulfill his obligation to marry her, even though he is still in love with another woman. She has had a crush on him since she was a little girl, that is not interested in being married to a man who is in love with someone else. The two of them find themselves embroiled in helping a young girl who finds her self in trouble because she was taken advantage of by the local rake. Basically the story is of the two of them getting to know each other while trying to help this young girl


it wasn’t riveting, and I don’t believe I will ever read it again. I always read a book again if I really enjoyed it first time. It was entertaining enough to get me through an afternoon where I didn’t feel very well. Unfortunately, that’s all I can say for it! I think it was narrated pretty well.

While there were parts of this book that I enjoyed, it probably will not be reread. I had a hard time staying focused on the story and didn’t particularly like how much Isabelle lied.

The narration was phenomenal.

I really loved this story! I loved the characters and the journey they had to go on in order to be together. I loved that they came together while helping someone else. I thought the narrator did a great job of reading this book and kept my attention the whole time. I highly recommend it!

I liked that this book wasn’t about the darling of the season but more of an ordinary girl just wanting to be a good person. Isabel went to great lengths to protect her heart. She was a sensible sort of person but she struggled with really being honest about her own feelings for Charles to the point that while not outright lying told some half truths. In that I was a bit disappointed in her as she was such a very strong character otherwise.
Charles was fun and a down to earth person. The complete opposite of a rake. Their is a rake in this story to showcase the differences in character Charles had to the less preferred character. Charles starts out the beginning of the book being disappointed in love and allows himself to become engaged to Isabel. It wasn’t what he wanted but a situation he allowed due to his hurting heart. Isabel was not about to become a wife out of pity.
The book was about helping others, being kind, and getting ones heart desire, sometimes through sacrifice.
I enjoyed the narrator. Some of the voices were hard to distinguish between characters. And the main character, a woman, sometimes sounded like a man to me. But I really enjoyed her calm peaceful flow of words.

I liked the hero and heroine and hoped for a happy ending for them amid a drunken wager, a horrible villain, the scheming ton, and many miscommunications and misconceptions. The story was well narrated and the story was captivating and compelling to listen to. I looked forward to what would happen next every time I was able to listen.

I'm looking forward to Isabel's sister's story and hoping for a happy ending for her too.

Excellent story telling. Excellent characters. I loved the development of the hero and heroine. Isabel is a kind hearted and romantic soul. Charles is an honorable and kind hearted man. They are a fantastic couple. Learning and growing together as friends each having hopes and dreams they are too afraid to share with the other. Fabulous HEA!

I loved this book and stayed up late to finish it (which is a huge deal for me). I kept wondering how the author would tie everything up and it kept me guessing up till the end.
This was a clean book with no bedroom scenes or foul language.
The narrator was great too. She had a great voice and accent and changed it up for each of her characters.
I would definitely recommend it.

A clean romance novel that I really enjoyed!

I was glad I was listening to the book, because I could keep listening while cooking or dishes or driving. It was a great story that pulled me in, I didn't want to stop listening. I fell in love with the main characters. The woman who reads it does a fabulous job, she is easy to listen to.

I absolutely loved this book! I fell in love with the characters. I don’t want to give anything away but to say say this was the most delightful audiobook I’ve heard in a while. It’s one of those books where you have to listen every waking moment you have the opportunity to listen. You won’t be disappointed.