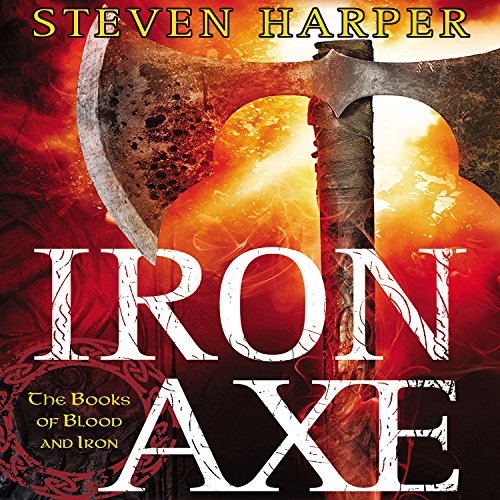 In this brand new series from the author of the Clockwork Empire series, a hopeless outcast must answer Death's call and embark on an epic adventure... Although Danr's mother was human, his father was one of the hated Stane, a troll from the mountains. Now Danr has nothing to look forward to but a life of disapproval and mistrust, answering to "Trollboy" and condemned to hard labor on a farm. Until, without warning, strange creatures come down from the mountains to attack the village. Spirits walk the land, terrifying the living. Trolls creep out from under the mountain, provoking war with the elves. And Death herself calls upon Danr to set things right. At Death's insistence, Danr heads out to find the Iron Axe, the weapon that sundered the continent a thousand years ago. Together with unlikely companions, Danr will brave fantastic and dangerous creatures to find a weapon that could save the world - or destroy it.

What listeners say about Iron Axe

Because of the lack of hype around this book, I had no expectation going into this book. So it was quite a surprise when I ended up really liking this book.

The book starts off a little rough but evens out as you move forward. It took me a while to get into it because, although I expected this to be an Adult fantasy novel, I didn’t expect it to be as gritty as something similar to ‘A Song of Ice and Fire’ by George R. R. Martin. The fantasy world seems more like a dystopian since there isn’t much order or governing going on and where slavery and rape isn’t as big of an issue for the population as I would think it would be. But thankfully, the focus shifts more to Danr’s story/quest forward and less on the cruelty of the world as you get further into the story.

But despite the fact that Danr is the main protagonist of the story, half troll half human, I actually liked Aisa—and to a greater extent, even Talfi—more than any other character. Considering she is a sex slave and constantly abused by her master and his wife, she is a very strong female protagonist. She is at times sassy, sharp, and loyal to the bone towards someone who looks after her. Despite the fact that her father sold her into slavery, at one point in the book, she even comes to let that past go. For someone who bares physical scars of rape and abuse, covers herself in heavy clothing so the world can’t see, I can imagine that forgiving the man who became the reason for it all wasn’t an easy feat. She is incredibly strong and I loved her for that. Talfi, on the other hand, is just as lovable a sidekick as one would want. Although there isn’t much humor in this book, Talfi’s trustworthy attitude contrasting against Aisa’s dark sorrows and Danr’s self-deprecating musings was a refreshing change at times.

Danr, as good a character as he was, was sometimes a bit too annoying. Not for any particular reason honestly, simply because of this constant good vs evil fight he has with himself. I sympathized with him, because of the way he has been treated all his life, but often I just wished he would get over the notion that everyone thinks he is a monster and move on with life. In retrospect, he did have the potential to be a bad person (as do we all) but he never lets out the “monster” within him so I really felt bad that he wasted so much time scolding himself over nothing.

There is a bit of confusion in terms of what is the targeted audience for this book. In reminded me slightly of ‘The Final Empire’ by Brandon Sanderson because of this. The world itself definitely deals with a lot of adult issues but because the main characters are quite young, sometimes their narratives can make feel as if you are reading a young adult novel. Then something awful would happen, or someone would swear (some of the swear words seemed out of place at times actually) and suddenly, I am snapped out of the misunderstanding that this is not a young adult novel.

Overall though, I was more than satisfied with numbers of twists and turns this story takes, as well as the fantastically neat ending. It was a little too neat perhaps, in terms of what happens with Talfi, but because I like him so much…I don’t really care. The mixture of orcs, humans, elves, etc. also never felt as overwhelming as I thought it might—everything felt as if it belonged in the story. If there is a second book in this series, I am certainly looking forward to it!

Disclaimer: An audiobook copy of this book was provided by Audible in exchange for an honest review. All opinions are my own and have not been influenced by any exterior motives.

If you could sum up Iron Axe in three words, what would they be?

I really enjoyed the writers detail of the characters and their surroundings. It was easy to imaging exactly what the writer was seeing.

I really enjoyed this book and all the characters and their adventures....very good book.

I LOVE this story!

If you could sum up Iron Axe in three words, what would they be?

Domr = 💞😍 Love, Strength, wields a power that makes him an unlikely leader

The narration or I should say performance of this life altering journey the characters went on was outstanding! No one character sounded alike and every voice for each character was phenomenal.

What did you love best about Iron Axe?

That is was a underdog story.

This story starts kind of slow. Was well worth the wait. Enjoyable story.

I found this to be an engaging story overall. The plot wasn't ground-breaking, but was easy to follow and kept me interested. I was invested enough in the characters to be eager for them to be successful in their quest and to mature in their relationships and in their self-images. The plot device around the same-sex attracted character was too heavy-handed and parts of the story were a bit discordant because of it, but the story flowed well for the most part.

The narration was a mixed bag for me. The dialog was fantastically good, with each character having his or her own distinctive voice which remained perfectly consistent throughout. The descriptive narration, on the other hand, was decidedly annoying -- there was little to no inflection and the pacing was excruciatingly slow. It almost felt like I was listening to a computerized voice. The dialog was exceptional enough to keep me invested, but I really wish Mr. Ochlan had chosen a "narrator" character voice to use when he read the descriptive text.

All-in-all, I quite enjoyed this book and will look forward to additional adventures from our intrepid heroes.

Refreshing story, but there is some language

Good, engaging story and great performance! There was some language I felt was unwarranted in what might otherwise be considered a YA novel, but it wasn't overwhelming and I still really enjoyed it.

The wonderful story, along with the excellent narrator, brought this tale to vivid life. I am thrilled to know there is a Second Book waiting to be released!!!!!

I WANT YOU TO WALK RIGHT BESIDE ME
I agree with RAM, that this book is so under hyped, I did not expect much. It took a while for this to get into it's deepest intellectual form, but when it does it hits on all cylinders. This is one really big, well written fairy tale. I thought it was entertaining throughout and highly recommend it to those who like well written, but not full of fight scene books. If your looking for mindless swash buckling action, you will not find it here.

STATUS MATTERS, BUT ONLY YOUR STATUS, NOT YOUR FAMILY'S STATUS
This is one theme that is near and dear to me and one which you almost never find in a fantasy epic. I hate books in which all achievements are based on your family tree.

DO NOT SHOW THEM THE MONSTER
This is a character driven story. The main character is half troll and half human. In the first hour or two, the author may go a little over board with all the ways this character is mistreated. I was worried this was going to become some depressing YA clichéd melodrama. It does not. I disagree with some reviewers that say this is predictable and or that the characters are black and white. I thought all the characters were complicated with gray sides to them.

THE FACE LOOKED MORE ERODED, THAN WRINKLED
Those who like well written descriptions will love this. I do not like overly flowered language and this author manages to come up with unusual ways, but highly visionary ways to describes characters. The language is so well done that often you don't realize how well because it does not stick out like a sore thumb or try to overtake the story.

SPEECHES DON'T MAKE A KING, BUT A KING SURE MAKES SPEECHES
While the building up of this universe, requires some politics, the politics are not overly complicated and they are part of the story, not a burden to it.

YOU ARE LESS INTELLIGENT THAN YOU PUT ON
I have to agree with Shelia about the narrator. While doing voices he is excellent, but while doing narration, he is a bit slow and mechanical. I will also say that in the beginning there is some telling and not showing, when it comes to the background of Aisa. This may have been necessary to keep the length of the novel down. It is a minor grievance. I also thought it interesting that all the humans, elves, trolls, fairies and orcs had the same language. This shows a bit of laziness from the author.

CRUMBS ARE STILL BREAD
I don't know if authors read these reviews, but if Harper is listening, I would love to listen to some prequels. Danr's parents story, Aisa could use a book all her own and for the action packed seekers, all the previous wars, with the story of the making of the IRON AXE

This book had the distinction of not being the worst book I had ever listened to. It was written with a YA level of grammar and but with very adult themes making its target audience a bit unclear.

Would you listen to Iron Axe again? Why?

I have read this twice. One of the very few times I have done that.

What other book might you compare Iron Axe to and why?

It is basically a Shannara type of story.

There are a few excellent chapters.

I binge listend to this book took 3 days but worth the effort.