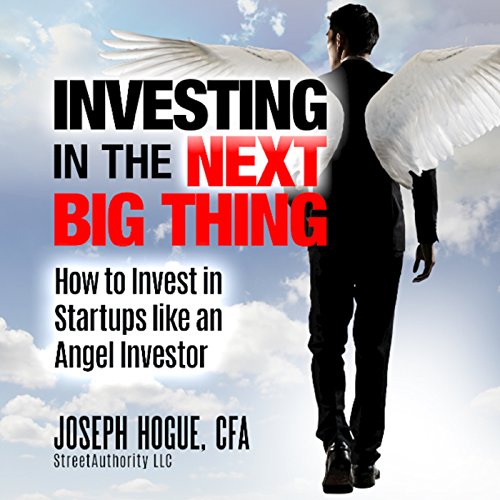 Investing in the Next Big Thing

How to Invest in Startups and Equity Crowdfunding Like an Angel Investor
By: Joseph Hogue
Narrated by: Joseph Hogue
Length: 3 hrs and 57 mins
Categories: Business, Personal Finance & Investing
4.5 out of 5 stars 4.5 (2 ratings)

Investing in the Next Big Thing

There's a secret world of investing controlled by angel investors and venture capital.

One investment has been the secret of the wealthy for more than 80 years. It accounts for nearly a fifth of the wealth for million-dollar investors and nearly four times the return compared to stocks.

Investing in startups has led to an average 27 percent return for wealthy investors, nearly four times the average 7.4 percent annual return on stocks over the decade to 2013.

When asked where they invested their money, investors with an average of $7.6 million told BNP Wealth Management those alternative investments like venture capital and startups were their second-largest investment after their own business.

Consider Peter Thiel's 2004 investment of $500,000 in Facebook as its first outside investor. By the time the rest of us could invest in Facebook, Thiel had already made $1.7 billion for a 340,000 percent return on his investment.

Welcome to the world of startup investing and equity crowdfunding.

I've spent nearly a decade analyzing startup investments for venture capital firms and angel investors. I set up the research department for one venture capital investor and managed a team of six analysts, poring over pitch material and market research to find the best startups in which to invest.

Investing in startups is like nothing you've ever seen in the stock market. These companies aren't covered by analysts, and you won't find a P/E value on Yahoo Finance. You won't hear other venture capital investors or angel investors sharing their process or picks on TV either.

They don't want you stealing those 27 percent annual returns.

That's what this book is all about, using a process I have developed over years as a venture capital analyst to avoid the risks in startup investing and find the best deals.

It's not an easy process. It involves research and strategic planning on your part. I'm ready to share it with you if you're ready for the challenge.

I was concerned from the publishers summary that this was going to be "other people's stories" about big wins and losses, etc... Thankfully I was wrong.

Hogue gets right to work providing just enough context to set the stage and quickly gets on to valuation and risk management processes and best practices. He moves fast and it will require a 're-read' for me but the theory, application and resources are very clearly communicated and well organized .. with zero B.S. filler content!

Also.. This book is every bit as applicable to pre-money CEO's as it is to Investors. I'm in the middle of a seed raise and needed a primer to keep pace with our financial advisors.

Have listened twice. A lot of good information for a newbie like me. This book is a must read for making intelligent careful decisions.

great place to learn about crowd funding. short and to the point, highly recommend you read it

Some great content, too bad the reading was iffy

First off, I've never listened to a book on Audible before that has so many misreadings and studders. I found it quite distracting and this is a very short book in print, it probably would take a lot less than 4 hours to get through it if it was read smoothly.

That said, there is some truly great content in this book. Whether Equity Crowdfunding is really going to catch on and show the same sort of returns that traditional Angel Investing has shown is certainly a matter of debate (I personally feel the vast majority of the best deals are going to stick to the more traditional routes, so finding those truly great companies is going to be a lot tougher for equity crowdfunders). However, the content about how to analyze and value a company is really fantastic, worth the price of the book alone.

This was my second book on Angel Investing. I think it does a really nice job of laying out the tactical steps you can take to analyze startups and be able to make the right decisions on investing. This is a great compliment to Jason Calacanis' book, Angel. His book provides a great overview on Angel Investing and the different things you need to do to be successful at a high level. This book gives you the tactical and analytical steps you can take to help with the investing and decision-making process.

Knowledgeable, easily understood (if you have at least some financial background), practical and doable. A professional narrator would've made it a bit easier on the ears.

Informative and easy to understand

Have a pen a paper handy. If you’ve never looked in to any of this then your in for some great info.