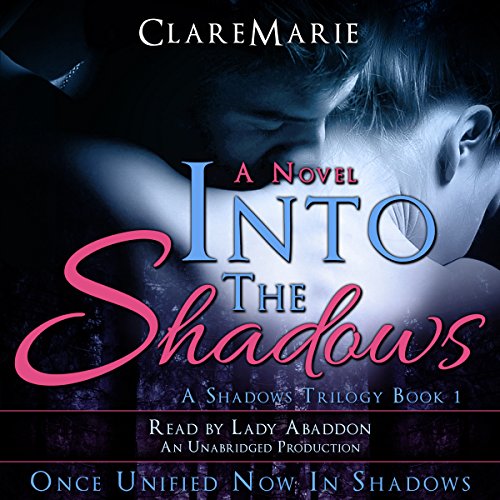 By: ClareMarie
Narrated by: Lady Abaddon
Try for £0.00

The unabridged audiobook edition of Into the Shadows, ClareMarie's first installment in the breathtaking The Shadows Trilogy.

Imagine living in a world where there are more than humans - a society where paranormals co-exist with us, and a corrupt government kidnaps them so they can study their immortality and powers.

Where would you go?

Imagine thinking you were human all your life, then finding out you're not, and if the government discovers you, you'll become the most desired paranormal test subject to ever live.

Where would you hide?

In 2050, our world was divided into four species - humans, paranormals, descendants, and mutated humans. Ava James thinks she's human, but finds out she's not...and in more danger than she ever could have realized.

Her days just got a whole lot busier.

"You need to learn to protect yourself. You need to know the dangers of what you are, but also the strength of who you are."

What listeners say about Into the Shadows

Into the Shadows by ClareMarie is a very good story with tons of detail and background information to really make understand the book. Ava
James is a wonderful character that thinks she is human only to find out she is paranormal. Not just any paranormal either, one with many abilities. Love how she learns all about who she is while finding her one true love, her mate. Together they start to build their lives together but are always trying to protect themselves from the government that are seeking them out for research. My only critique of the book is the audio narrator's voice to me does not
Match the character at all. The narrator did a great job otherwise.

Interesting story, but the audio wasn't for me

Okay, so I totally love the premise for this series, and I enjoyed the characters, but it just missed slightly with me. I listened to the audiobook version of this story, which I stopped listening to for a little while because the narration bothered me a lot, but I decided to finish the audio. I think it may have colored the story in a bit of a negative light for me, so I don't know if it's the writing that felt choppy, or if it was just how the story is read. So, I would recommend reading the book yourself, and not the audio. I do think the story moved a bit too fast, and the author spend some unneeded time describing certain things, but as I said earlier, I enjoyed the premise. The setting for this book is a bit futuristic, and deals with paranormals that are known to society, but are still looked down upon by the government. Ava, the character's POV this book is in, thinks she's human, but finds out she's a bit more than that, which I found interesting. Ava also meets Kyran, a sexy stranger that she feels a pull towards, and he opens her up to a new side to the world. I really enjoyed the romance, I thought it was super sweet and this is definitely not a YA read, this is definitely a bit more adult, so be prepared for sex scenes. The relationship does move quite fast, but that didn't bother me. There's a bit of mystery to this story that I liked, and a bit of action, which I would've liked a bit more of! This book leaves you hanging, so I would like to continue the story with the next book, but I'll stay away from the audio. The writing didn't quite connect with me, but the premise and characters made this a good read for me. I almost did 3 stars, but I thought about it more, and decided to go 4 stars because I was entertained and interested throughout the whole story, and I want to continue the story.

This story was fast paced, in fact probably too fast, I found myself reversing to re-listen in lots of places bevause it was hard to follow along. I felt the narrater's voice was droning and it didn't keep my interest. I will try the next book because the story itself was very intriguing.