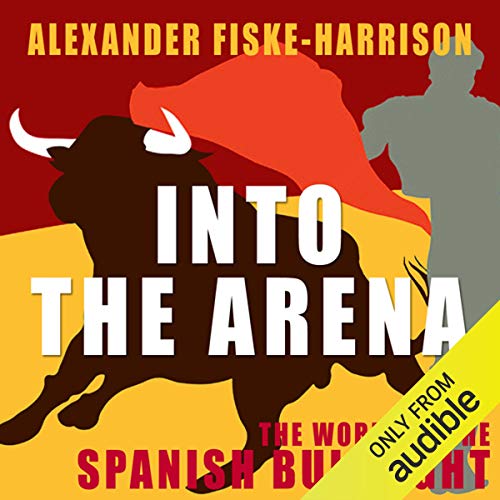 Shortlisted for the William Hill Sports Book of the Year Award 2011.

In this remarkable and controversial book, Alexander Fiske-Harrison follows the tracks of a whole bullfighting year in Spain. He trains and takes part in the sport himself. He gives us memorable portraits of bull-fighters and bulls, of owners, trainers and fans - of a whole country. Fiske-Harrison offers a fully rounded and involving portrait of an art as performed for centuries and of the arguments that dog it today.

Describes the history of the bull fight and all of those involved. Read in a manner that is easy to listen to you are given a thorough history of the subject. Comparisons are made between the killing of an animal for art/culture and the more accepted killing of animals for food. I am not a fan of bull fighting buy of Spanish culture and as a result found the subject intriguing. I was not disappointed and listened to the whole book in 3 days.

Insightful from a knowledgeable person.

If you could sum up Into the Arena in three words, what would they be?

Disappointed the author didn't narrate the book himself, it took away from the value of the message he was trying to get across. Was this book just an extended blog and passed straight to the narrator.

Some very interesting parts some drawn out parts, worth reading if you have an interest in bullfighting.

A decent read for those who enjoy this subject

Yes because I believe it gives an insight into a world little known outside Spain. A good attempt with obviously a great deal of research into the history of bullfighting.

I thought the end was a little predictable but quite enjoyable none the less.

No emotional reaction for me but understand it could effect some people who have no or little experience of this tradition.

Unique view into a secret "art"

Everyone have an opinion about bullfighting. This book brings the reader on an an journey into the secret, mythical world of the arena. I like approach and honesty of the contents. The language is good and I like the philosophical seasonings.

I think this book will suit a broad audience.

This is a wonderful book exploring the world of bullfighting and the moral issues both for and against the art. I'd highly recommend it to anyone who is interested in learning about how it works, or anyway who has read Hemingway's books about it.

However, the narrator is awful. For some reason, he seems to be doing an impression of William Shatner throughout the book, pausing at strange times and making every sentence seem like the dramatic climax. Because of that, you often get distracted from what the author is trying to say.

Nuanced perspective on a challenging subject

What other book might you compare Into the Arena to and why?

If you're interested in the subject matter I would highly recommend Hemmingway's Death in the Afternoon. This is a great companion to that classic. Into the Arena is nicely written, addressing the fight from a first person perspective while fleshing out some of the history. He considers the morality of the practice without resorting to Hemmingway's habit of dismissing detractors as pansies. Overall it does justice to the art of bullfighting with a measured, thoughtful tone.

I disagree with reviewers who disliked the performance. The reader was well suited to this book and I thought he added much to it.

GREAT book with a terrible narrator...

There is nothing I would change about the actual book and I highly recommend reading it either in the Kindle version or the actual paperback. It's extremely engaging, well-written, and factually interesting. The characters are well developed and draw you into the story as though it were fiction, despite it actually be journalistic/autobiographical.

The balance of depiction of bullfighting culture and the characters of the bullfighters with facts about bullfighting.

Would you be willing to try another one of Paul Thornley’s performances?

Never!! He took a book that was written in a somewhat "Generation X" voice and had a great balance between humor, journalism, philosophy, and action/drama...... and made it SO HIDEOUSLY DRAMATIC that the dramatic moments that ARE in the book lost their meaning (and the true dramatic moments in the book are very poignant normally). This narrator can't say, "The bull weighed 1,700 pounds" without sounding like the worst kind of soap opera actor....

Definitely. This would be an awesome movie.

Kudos to the author and my sympathies that they picked this narrator (he might be a good stage actor in very dramatic roles-- tragedies, maybe). Another version should be made....

Where does Into the Arena rank among all the audiobooks you’ve listened to so far?

I thoroughly enjoyed this book. I was so sad when it was done. His accounts of his interactions with modern matadors as well as his research into the history of bullfighting were fascinating. If you interested at all in the bullfight this is a must!