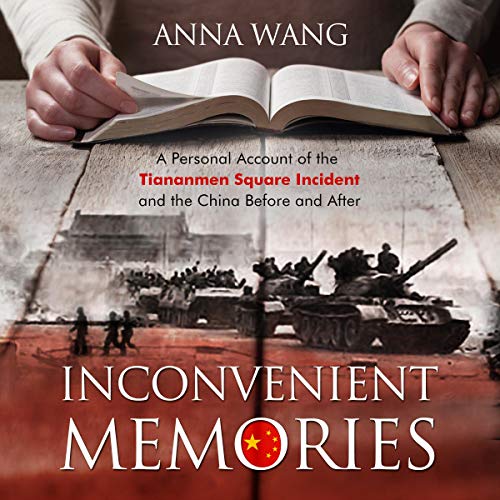 Inconvenient Memories: A Personal Account of the Tiananmen Square Incident and the China Before and After

Inconvenient Memories: A Personal Account of the Tiananmen Square Incident and the China Before and After

Inconvenient Memories is a rare and truthful memoir of a young woman's coming of age amid the Tiananmen Protests of 1989. In 1989, Anna Wang was one of a lucky few who worked for a Japanese company, Canon. She traveled each day between her grandmother’s dilapidated commune-style apartment and an extravagant office just steps from Tiananmen Square. Her daily commute on Beijing’s impossibly crowded buses brought into view the full spectrum of China’s economic and social inequalities during the economic transition.

When Tiananmen Protests broke out, her Japanese boss was concerned whether the protests would obstruct Canon’s assembly plant in China, and she was sent to Tiananmen Square on a daily basis to take photos for her boss to analyze for evidence of turning tides. From the perspective as a member of the emerging middle class, she observed firsthand that Tiananmen Protests stemmed from Chinese people’s longing for political freedom and their fear for the nascent market economy, an observation that listeners have never come across from the various accounts of the historical events so far.

What listeners say about Inconvenient Memories: A Personal Account of the Tiananmen Square Incident and the China Before and After

loved the history, flow, honesty and details of your writing. I look forward to your next book. well done.

A Gem of a Non-fiction Piece

An opinion piece by Anna Wang on Newsweek.com led me to this eye-opening and well-written first-hand account of the Tiananmen massacre. I have to say that it is an extremely relevant time to be reading this memoir, with the Hong Kong protests still raging on during the 30th anniversary year of the Tiananmen event. This was a gem of a non-fiction piece, the most powerful account of the Tiananmen Square Protests so far. Wang hasn't stopped with focusing just on the protests but allows us to have a glimpse into the aftermath. The tragedy impacted everyone involved, with the effects lasting for decades and generations. It even reaches to Wang's life as an immigrant. Wang was born in 1966. She was raised by her grandmother, who was a woman lacking education. Still, she influenced Wang as she grew up and developed, as her ideals, beliefs, and values progressed, as she discovered the socio-economic system, the regimes, and the policies. Wang went to Peking University, where she pursued a major in Microelectronics first and changed to Chinese literature later. When the Tiananmen Protests broke out, she was working in a Japanese company. Her boss was concerned whether politics would affect the company's investment in China, and she was then thrown into the midst of the Tiananmen Square protests to cover the updates for her employer.  This is an honest book. Wang proposes a theory in her book:  The reason why democracy hasn't come to China is simply due to the fact that so many intellectuals and businessmen left China. One of the central themes running through this personal account is how she constantly struggles with her own sense of identity and sense of belonging. If you want to look behind the headlines and gain a deeper appreciation of this increasingly important but complex country then I recommend this book. Highly recommend to lovers of memoirs, books of Chinese modern history and books about immigrants and women.