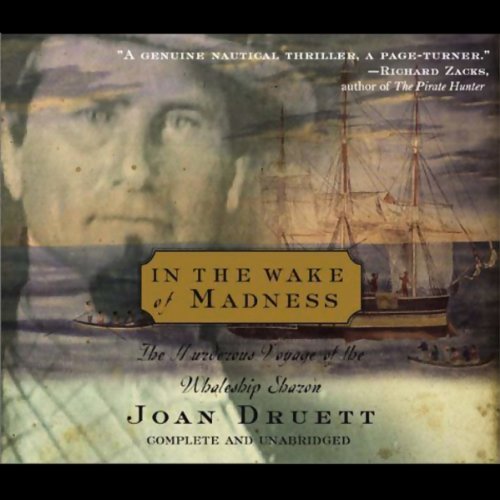 In the Wake of Madness

The gripping true story of one of the 19th century's bloodiest mutinies, written by an award-winning maritime historian.

On May 25, 1841, the Massachusetts whaleship Sharon set out on what became one of the most notorious voyages of that century, and one of its best-kept secrets.

Commanded by Captain Howes Norris, the Sharon headed for the whaling grounds of the northwestern Pacific. At Pohnpei Island, 12 men from the Sharon deserted the ship, leaving her critically shorthanded. After steering for New Zealand to recruit more crew, the men on lookout raised a school of sperm whales. Two boats gave chase, each with a crew of six. Five men were left on board the Sharon: Norris, three pacific Islanders, and a Portuguese boy named Manuel. While Manuel was in the rigging, the natives hacked the captain to death.

The story of the mutiny, the murder, and the ship's eventual recapture unfolds in breathless detail. Why did so many men desert the Sharon? Why did the so-called "savages" kill the captain? Were the seeds of disaster sown long before that bloody day? You'll follow the events eagerly, as did an aspiring young writer of the time: Herman Melville.

"Manages a perfect balance between telling the story in an unfussy yet dramatic manner and honoring its complexity." (Publishers Weekly)
"Dennis Boutsikaris goes beyond a dry, factual reading to create a gripping drama of cruelty on the seas, as suspenseful as any of Melville's fiction." (AudioFile)

What listeners say about In the Wake of Madness

I always feel bad never to have read Moby Dick ………. This book gives you a very good picture of whaling.

I love learning of true historical events while being completely enthralled and entertained. A great listen!!

Want to read more like it. Are there any recommendations. Have read some philbrick books. Does Joan Druett have any more audible titles.

Another well researched and written book. The author has tons of books lets get some more on audiobook format please!

I am a fan of anything nautical but this story of the Whaleship Sharon was simply riveting. I listened in one day! An astounding true tale of a brutal voyage, a nihilistic captain, and an unprecedented number of desertions, mutiny and murder. Dennis Boutsikaris does a fantastic job with narration. I highly recommend this audiobook.

Review In The Wake Of Madness

When first scanning the description of this book, I was intrigued by the subject; a sea captain murdered by island natives on his own ship? My heart went out to this good, brave man, responsible for crew, safe passage, and fulfilling his obligation to the shipping company by which he was employed. This was indeed a mystery. I wondered why we didn’t learn more about this sea captain’s character at early introduction of him in the book. It was only much later when his shipboard behavior was revealed, that all sympathy toward this man is lost. This author wrapped things up very nicely for the reader and I enjoyed listening to the story unfold. I especially liked the reader. I will look for more books read by Dennis Boutsikaris. I hope to find more non-fiction adventure stories/mysteries like this by the author as well. Nicely done. I give it 4 Stars. Some of the events became unwieldy, and others leave the reader in a bit of a quandary, which was probably intended. I feel this could have stood a bit more editing, but overall a very good, well read book.

Hidden Story
A good book that might belong in the true crime section. America was producing serial killers way before we thought.