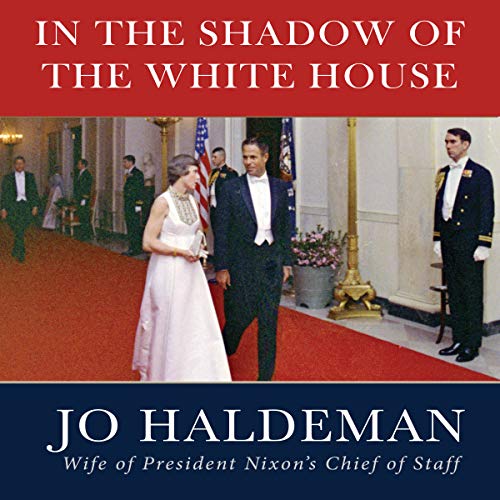 In the Shadow of the White House: A Memoir of the Washington and Watergate Years, 1968-1978

For her first 40 years, Jo Haldeman’s life followed a conventional path. While her husband, Bob, built his career in advertising, Jo comfortably settled into her role as mother of four, housewife, and community volunteer.

In 1968, Jo’s world changed dramatically. Richard Nixon was elected President of the United States, and Bob was offered the job of a lifetime - White House Chief of Staff. As Jo and Bob discussed the opportunities and challenges that this move would entail, little did she anticipate the course that her life, and her relationship with Bob, would take over the next 10 years.

In this insightful, poignant, and guileless memoir of those 10 years, Jo shares her story as the wife of H. R. Haldeman, often referred to as the second most powerful person in the White House. She offers a window into the world of trips on Air Force One, weekends at Camp David, and events at the White House, as well as family vignettes and the growing stresses of her husband’s demanding job.

Then a bungled burglary at the Watergate erupted into a national scandal. The news began to feature the Haldeman name. Blaring headlines and vicious political cartoons accompanied new revelations of a cover-up. Multiple investigations and Senate hearings followed. Criminal proceedings loomed.

Jo’s compelling account takes the listener on her journey from the heady heights of Washington life through an excruciating public resignation and trial to her husband’s conviction and imprisonment. In a true period piece, Jo illuminates the story of the "woman behind the man" and personalizes the Watergate experience.

What listeners say about In the Shadow of the White House: A Memoir of the Washington and Watergate Years, 1968-1978

The Most Personal Watergate Memoir Ever

Jo Haldeman, wife of the late H. R. Haldeman, writes what is perhaps the most personal account of Watergate. Written from her perspective, it is more a tale of two people, herself and her husband, than Watergate or the Nixon administration. In fact, Mr. Haldeman's experiences in the White House play a supporting role to the central character, their marriage. Anyone familiar with Watergate knows what happened, but Mrs. Haldeman writes in the present tense, as the events unfold. She is unaware of what is to come as Watergate unravels, a perspective we can't possibly have 47 years later. Mrs. Haldeman writes so well, and narrates with such feeling, that it is hard not to forget this is a true account, not a novel. I hate to say anything critical because Mrs. Haldeman writes from her heart, sharing her feelings and fears, all of which are uniquely hers. The book drags a little during her recounting of visits to her husband in prison. They obviously were important to her and the development of their marriage. I also found it hard to be sympathetic for their financial woes while he was unemployed. They managed to fly back and forth across the country, keep a gardener on staff, and continue to send their children to private schools.Those bits aside, the book is nearly flawless. I recommend it to students of history and to anyone who wants to see a marriage that is strong and can withstand the ultimate test that prison and national ridicule can bring.

Fascinating story read by the author

Very interesting memoir of wife of President Nixon's chief of staff who went to prison.