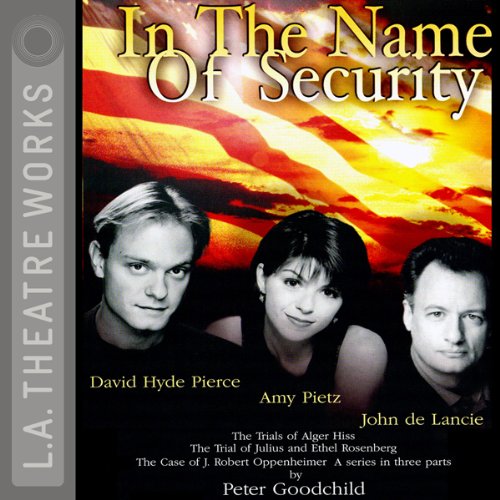 In the Name of Security

In the Name of Security

Martin Jenkins is a seasoned BBC producer who frequently works in this country. Equally adept at documentary and radio drama - he here combines these skills, with the help of codirector John Theochari - to present docudramas on the McCarthy-era spy trials of Alger Hiss, the Rosenbergs, and J. Robert Oppenheimer. The trilogy is atypical for L. A. Theatre Works, which normally tapes its audio plays in front of a studio audience. These BBC coproductions benefit from the controlled studio conditions under which they were made. They combine reenactments with interviews of historians and eyewitnesses for heightened realism. It's difficult to single out individuals from the outstanding cast, particularly when the sense of ensemble is so strong.

At the height of the Cold War, American democracy was challenged by the anti-Communist atmosphere of the McCarthy era. In the Name of Security re-opens three famous spy cases that rocked America between 1948 and 1954. Each hour-long program combines dramatic re-enactments based on original trial transcripts, archival material, new evidence, the latest assessments of American historians and scientists, and the commentaries of relatives and friends of the accused.
(P)1998 L.A. Theatre Works

As a person who grew up well after the events discussed in these three playlets, I found the information in them fascinating and new to me. The acting was excellent, as well. I was a bit puzzled by the "intent" of the author. In terms of tone, it sounded as though the listener is meant to feel sympathy for the persons involved--Hiss, the Rosenbergs, and Oppenheimer--but the facts presented do not lead in that direction. In the case of Hiss and the Rosenbergs, the narrator makes it clear that in recent years the Venona decodings have proven that they were certainly guilty of espionage, Hiss in time of war. That seems to constitute treason, which is worthy of severe penalty--including the death penalty. The Rosenbergs' crime seems even greater--what could be worse than giving atomic secrets to an enemy nation? The actors' declartions suggest that the civil rights of Hiss, the Rosenbergs, and Oppenheimer were violated, but other than citing that the "current of the time" during the "Red Scare" convicted them, rather than the evidence, I did not hear what seemed to me clear instances of violations. To my unfamiliar ears, the contemporary evidence (not Venona) sounded pretty damning, whatever the climate of the times. Oppenheimer was the only one who may have been treated roughly given his "crime," but then his punishment was simply to be removed from a job. How could a reasonable government have left in charge of such a vital defense/security program as atomic weapons a man who not only had had Communist sympathies but, much more importantly, had failed to disclose a security breach known to him personally for at least 6 months? What could the authorities have done--I mean, doesn't that constitute at least reason to doubt Oppenheimer's trustworthiness?

At any rate, as I said, I was previously unfamiliar with these cases, and I am certainly disposed now to find out a great deal more about all of them. I highly recommend the drama to anyone interested in postwar history

Alger Hiss perjured himself. The Rosenbergs betrayed America. Oppenheimer became a security risk. But this portrayal halos their roles.

It's a fascinating story expertly presented.