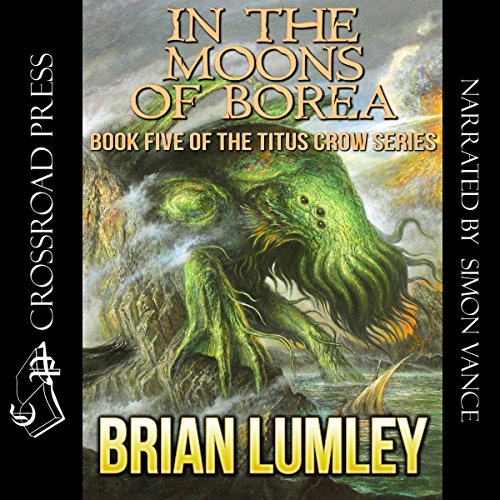 In the Moons of Borea

By: Brian Lumley
Narrated by: Simon Vance
Try for £0.00

The Titus Crow novels are full of acts of nobility and heroism. Titus Crow and his faithful companion fight the forces of darkness - the infamous and deadly Elder Gods of H.P. Lovecraft - wherever they arise. The powerful Cthulhu and his dark minions are bent on ruling the earth - or destroying it - yet time after time, Titus Crow drives the monsters back into the dark from whence they came.

In the Moons of Borea is the fifth book in the Titus Crow series.

What listeners say about In the Moons of Borea

In the Moons of Borea is another excellent entry in the Titus Crow series - although Crow himself doesn't actually appear in this adventure.
I didn't enjoy this one as much as the previous instalment, The Spawn of the Winds, but it's definitely worth a listen.
Simon Vance's narration on the whole is very strong, but some of the Scottish accents are a bit iffy. It doesn't spoil the audiobook, though.
I'd definitely recommend this title.

Vikings, Liches, and Old Ones, Oh My

In previous books, Titus Crow successfully defeated an invasion of Cthonian worms and escaped a trap set for him in the Dreamlands as well as discovered the Elder Gods' homeworld of Elysia. Henri de Marginy acquired Randolph Carter's Time Clock which, essentially, functions like the TARDIS and helped said individual become a wandering space hero. Finally, Hank Silberhutte married the half-human princess of a displaced tribe of humans and helped thwart the machinations of the Great Old One Ithaqua.

In the Moons of Borea's premise is an attempt to do an old fashioned Pulp adventure tale teaming up Henri de Marginy and Hank Silberhutte on a quest to recover the lost Time Clock. It's very much in the fashion of the Doctor Who serials of the time, only with no budget limitations. Henri lands on the planet quite by accident (or drawn there by the Elder Gods) but has his Time Clock stolen by the forces of Ithaqua who take it to one of Borea's two moons. Visiting the moons via a magic tornado, they discover the beautiful Moreen who possesses Snow White-esque powers to talk to animals. Dealing with the local Vikings, they try to prevent an invasion of Borea and end up facing not a group of ancient primeval wizards and Ithaqua himself.

As the plot description attests, this isn't exactly the most traditional science fiction novel. It is full of off-kilter and weird elements purely for the sake of being cool. Our heroes also never really feel endangered because they routinely laugh at the Great Old Ones and run rings around their minions, which removes any feeling of danger which might otherwise be present. Indeed, the aura of invincibility our heroes possess is the biggest problem in the narrative as nothing seems able to stop them for any length of time. Despite this, it's an imaginative and colorful story with lots of fun to be had between the two protagonists.

The best (and worst) of both worlds...

This book brings together my two least favorite characters from the series, Hank and Henri, for a surprisingly interesting adventure.

Simon Vance is, as always, an excellent narrator. His voices are varied and distinct. His tempo shifts are effective. And if somewhat less (accurate to the text) than I'd like, his inflections are skillful.

In this book we find de Marigny (still) scouring the universe in search of Elysia, and (randomly?) landing in the very place Hank is stranded.

Since we already know these characters pretty well, I can forgive the lack of character development, especially since there are once again enough new characters to keep things interesting.

There are a number of redeeming factors, including encounters with (basically) Vikings, witches, ice priests, and others, along with some genuinely interesting plot elements, suspense, etc.

However, it must be said that this is a very strange story. The idea of riding a [hurricane/tornado/whatever] through space well and truly destroys my suspension of disbelief, as do a few other happenings throughout the book.

And, as before, there is still the issue that the women involved seem to be there just to pair up with the men. Even those who are well and truly powerful on their own (such as Armandra) seem to be almost, if not wholly dependent on those make characters.

The ending comes together well, if a bit predictably. I've been waiting to see epic battles with Great Old Ones and so far that's been a let down. Hopefully the last book is better in that regard.